Chicago Bulls Are Giving Back to the Community 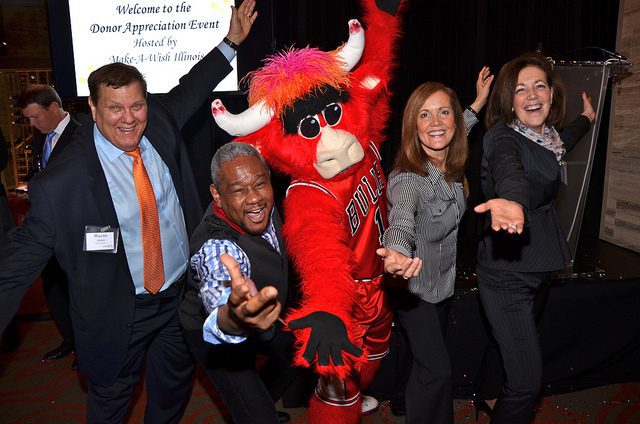 The Chicago Bulls have been giving back to the community that has supported them unconditionally. The organization feels a sense of responsibility to help out the young people with education, and support other organizations designed to provide families in need with monies, food, medical facilities, and educational resources. The Chicago Bulls organization is determined to make the streets of their city a better, safer place to live. It is through such charity that they donate money, time, energy, and much-needed resources. The Bulls association is dedicated to helping young people, not just on the court, but throughout the whole community. The Players and staff are constantly taking to the streets, hospitals, and schools connecting with the people, and the city they love.

The Chicago Bulls started a non-profit organization in 1987 to give back, and help out the people in the community that have faithfully continued to support them, particularly with the cities youth. The organization was originally called the CharitaBulls, but in 2012 they changed the name to The Chicago Bulls Charities, and put the focus on giving back to the community, with more emphasis on educating young people, and helping to prevent violence. The entire Bulls association considers itself one big family, that works together for positive influence on the ones with the most needs.

For about four years now, Chicago Bull charities have had pacific procedures for their grants, that helps them learn not only how many, but what type of programs are within the city that are set up to help under privileged youth, and their families. The first step is to send a letter of inquiry, and then they can submit a formal application for a grant. This helps Chicago Bull charities to aid in their giving back essentives to the community. It also allows them to do their part by helping even more people in the city. The Chicago Bulls charities believes that the longer an organization has been around the better, however there are exceptions, just because one facility has been noble with helping people for a while, it is possible for them to slip up, and lose their perspective. This charity keeps an eye on past and present performances, to make sure they keep doing what they are supposed to with the grant monies,

Chicago Bulls charities have partnered with many organizations, some of the Organizations that have been funded by the Bulls charity is the After School All Stars, Bright Pink, and the Big Brothers and Big Sisters in the city.

The After-School All-Stars, or ASAS delivers across-the-board programs that assist young people in learning, and living well. There are many activities for children of all ages, and teenagers to help them with their schooling, and living situations.

Bright Pink has a mission to prevent Breast, and Ovarian cancer in woman, through early detection with education. The Chicago Bulls charities have made it possible for them to keep moving forward with their mission of preventing cancer.

The Big Brothers and Big Sisters mentors young people to help them realize all that they are capable of in life. The program enlists volunteers in the community to act as a role model to a child.

The bulls also partnered with the White Sox, and formed camps for young boys and girls that go on throughout the year. The camps are set up to teach children every single part of the game, starting with the fundamentals. They offer baseball, softball, basketball, and a pitching program. Each camper gets to ask questions to a past or present player of the Chicago Bulls, as well as camp clothing, and bag with the Bulls logo on it. They also receive coupons for a White Sox game.

The Bulls and White Sox camps even does children’s birthday parties. The chicago bulls are more than just a basketball team, and are giving back to the community that they love.

Bright Pink: Our mission and vision

Chicago Bulls Are Giving Back to the Community added by Katherine on May 17, 2015
View all posts by Katherine →