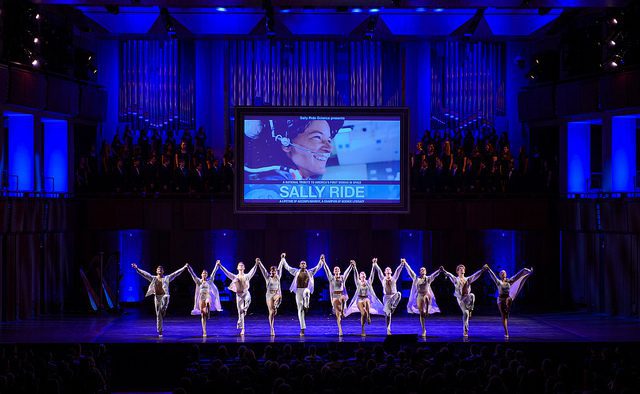 Google salutes Sally Ride on Tuesday, with a new animated Google Doodle. Born on May 26, 1951 in Los Angeles, today would have been Ride’s 64th birthday. The woman physicist and astronaut made history by becoming the first American woman in space.

In 1977, Ride finished Ph.D. in Physics from Stanford University, applied to NASA and was one of the six women picked to be candidates for astronaut. She was 32 when she explored space on board space shuttle Challenger on June 18, 1983. Such was followed by another space mission on Challenger again in 1984.

Google salutes Sally Ride with a new doodle to celebrate her 64th birthday, and worked with animator Nate Swinehart, doodle artist Olivia Huynh and Ride’s partner and CEO of Sally Ride Science, Tam O’Shaughnessy. Ride captured everyone’s imagination as a symbol of women’s ability to break barriers. However, her historic flight was not the only aspect of her multifaceted life.

The science writer Ride grew up with a chemistry set and telescope to play, and played football with neighbors. She thought of playing professional tennis, but put it aside to study science. In 1977, she saw an article that NASA was in search for astronauts, and allowed women to apply for the first time. She then sent her application.

According to O’Shaughnessy, Ride realized while in space, the importance of taking care of Mother Earth, and became an environmentalist. From the Challenger window, her planet looked wrapped in the thin air blanket. Years later, Ride wrote with O’Shaughnessy, books for young adults about the changing climate of Earth.

Ride then became a California Space Institute director and San Diego’s University of California physics professor. She learned girls were put off from pursuing math and science careers, and inspired them, the minority students and the young people in general, to be interested in Science, Technology, Engineering and Math.

O’Shaughnessy shared that Ride met boys and girls who wanted to be astronauts to explore space, oceanographers for their love of the ocean, zoologists as they love animals or engineers because they love to design things. Ride wanted to see the same stars in the eyes of those young people 10 years after, and knew they were on their way.

With O’Shaughnessy and three other friends, Ride founded Sally Ride Science in 2001, which built study guides and programs so that science becomes fun and interesting to young people. They have trained teachers on how to spark and retain interest in STEM, reaching millions of students with their programs, books and publications.

Ride still worked with NASA through public-outreach programs for the Gravity Recovery and Interior Laboratory mission, which objectives were to determine the Moon’s lunar interior structure and understand more its thermal evolution, and the knowledge gained can be extended to other planets. Ride likewise joined in the investigations into the Challenger and Columbia disasters in 1986 and 2003.

Ride won numerous awards throughout her life, such as, the NASA Space Flight Medal and the Theodore Roosevelt Award and was inducted into the National Women’s Hall of Fame. She died on July 23, 2012 from pancreatic cancer.

In 2013, Ride was posthumously awarded the Presidential Medal of Freedom, as the first American woman in space. According to President Obama, Ride “did not just break the stratospheric glass ceiling, but blasted through it.”

It has been three years after her death, and as Google salutes Sally Ride with a new doodle, the first American woman in space would be honored by the GooGle Doodle which depicts her sense of adventure and fun with being whimsy, said O’Shaughnessy. She added that who knows, the Doodle will motivate a kid somewhere to become an adventurer and a scientist, like Sally Ride.