By Kiara Hartley on May 2, 2015Comments Off on Hotel Prices in Las Vegas Drop for Mayweather-Pacquiao Fight 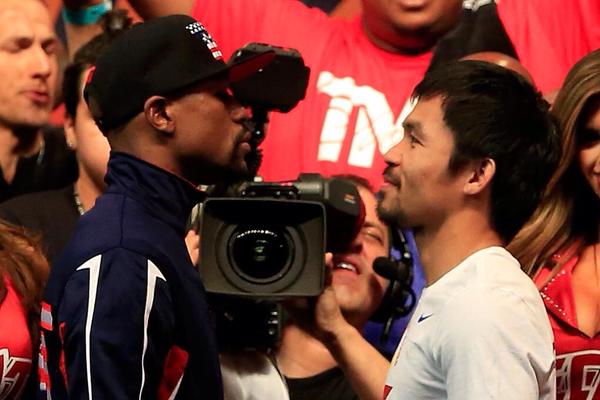 As the sparse tickets for the Mayweather-Pacquiao fight continue to sky-rocket hours before the match, the opposite can be said for hotel prices in Las Vegas. When the fight was announced months ago, and limited public tickets and viewing location tickets became available, people scooped up hotel rooms in anticipation of the tickets they were going to purchase. Now, just hours before the fight and amidst mass cancellations of those who missed out on tickets pull out, hotels are scrambling to fill rooms.

It seems MGM have put a monopoly of viewing locations and the fight itself with only so many locations authorised to show the fight while the rest of the world get to watch it via pay-per-view from the comfort of their living room. Cheaper than that $1500 room at the MGM Grand someone put a deposit on six weeks ago. That same room now is available for almost one-third of that as hoteliers desperately try to fix what their yield management could not predict. The Bellagio just last week was offering a room and two fight tickets for $18000. Now rooms in Vegas are starting at less than $150 ($128 at Circus Circus) while ticket brokers ask for $350,000 for the last tickets to the fight itself. A ticket to the fight is the same value as a house in the suburbs, or a few cars for a few family members.

According to some reports, MGM paid millions of dollars and traded out tickets to other casinos for top clients just to host the event. They mandated that the only viewing in Clark County would be on MGM properties with the fight at the Grand, and Mandalay Bay and The Mirage hosting close-circuit viewings of the fight. This monopolised control of the fight has worked in both positive and negative ways for MGM. It has garnered the most business for themselves, with most people preferring to stay at its locations for the fights rather than travel, but its legalized price fixing and late announcement of the tickets has turned away the high-flyers.

The tickets only went on sale last week for the fight, which means thousands of people were pre-emptively booking hotel rooms, and paying the big money, for a fight ticket that may not have existed. The instability of the ticket release dates scared away the celebrities and many major players because other casinos could not guarantee dates and people had other events organised. This ploy by MGM to create a buzz but restrict it (a popular marketing tactic) backfired. What was to be the most affluent event in sports history, made a bit less because of all of the last minute cancellations and price changes at Vegas hotels.

People who are still attending the match in some form, or those who just wish for a weekend in Vegas and are taking advantage of room prices, are advised to ask for the lower rates as some Hotel booking policies allow for this. It could save tourists bucket-loads. Business is still guaranteed to be big in Vegas for the weekend as last minute fight-goers come in, but the multitude of small bars out side of Clark County, but still in Vegas, that will be showing the fight are expected to be hosting a fair bulk of locals watching the fight. MGM and many other Hoteliers are expected to not make as much as projected this weekend as MGM’s unstable licencing and ticket release strategy backfires on them.

38 year-old Mayweather and 36 year-old Pacquiao have been trying to organise this bout for the last five years, appeasing fans in both the Mayweather and the Pacquiao fan circles. Pacquiao, a potential presidential candidate in the Philippines, aims to bring honour to his country. Mayweather wants to prove he’s still got it. There is talk that both fighters are now out of their prime, such as when the bout was initially organised, but recent fights by both Mayweather and Pacquiao have proved that neither have lost their touch. Manny has shown his hands are still fast while Floyd Mayweather has proven he’s still got what it takes. Mayweather got almost everything his way in the prematch set up from who enters the ring first to what gloves are used.

With the MGM in control of this match that was five years in the making, people are going to be in for a show. It will be the end to a campaign by fans of both fighters world wide with only one victor. Mayweather v. Pacquiao. US v. Philippines. Let the match begin.