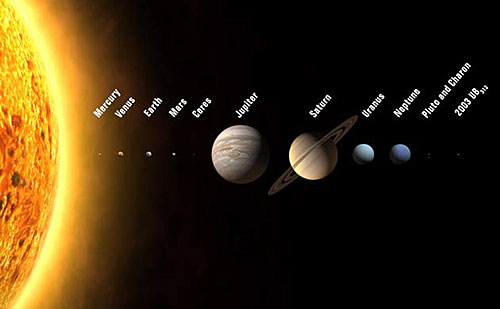 NASA has managed to keep their names in the headlines for the past few months and their latest discovery is nothing less than a beautiful site. With advances in recent technology and photography, NASA was able to capture new footage of the dwarf-like planet Ceres. Although not a discovery of a new planet, this new imagery depicts the planet in ways that researchers have never seen before.

On May 23, NASA’s spacecraft Dawn caused the scientists to further evaluate their previous assumptions. The craft took new footage of the solar system’s largest asteroid and may have revealed that life could have come from this cold rock. The high-detailed imagery shows some reflective spots on the asteroid’s surface that could be signs of frozen ice or minerals. Though not 100 percent certain, scientists theorize that the plant could have once housed some type of water-based life. Further detail of the planet’s surface will come to light once Dawn makes a closer orbit on June 3rd.

The asteroid Ceres was nicknamed the ‘dwarf planet’ by the International Astronomical Union because of its size in comparison to other planet’s in our solar system. Ironically, Ceres is one of the largest asteroids to orbit Neptune and largest within the asteroid belts of Mars and Jupiter. Ceres was first discovered by Giuseppe Piazzi in 1801 and was the first asteroid to be documented by astronomers. Since its large mass, discoveries first categorized it as another planet within our solar system. It was until years later that it was later classified as an asteroid.

From what scientists have gathered over the years of studying the false planet are its distinct characteristics. It is the thirty-third largest body in the Solar System and surface comprises mostly of ice and rock. Because of its location within the belt, it is nearly impossible to see with the naked eye from Earth unless under very dark skies. The asteroid also is theorized to the only one in its belt to not be unambiguously formed by its own gravity. For a long time, scientists theorized that Ceres may have housed an ice volcano because of its emissions of water vapors. This theory fueled the further exploration and examination of Ceres’ surface with the Dawn launching.

Originally launched in 2007, the 437 million dollar Dawn spacecraft was set to help scientists further understand the large asteroids Ceres and Vesta that orbit within the asteroid belt between Mars and Jupiter. Considering that these two large masses were left over from the solar system’s early days, scientists hoped to use this research to further understand how worlds like Earth and Mars came to formation.

Though the reflective images first received gave light to a possible ice volcano with Ceres’ mantle, the new images refute these theories. With the newly detailed imagery and specs obtained from the robotic spacecraft Dawn, scientists claim that the reflective pieces are comprised of a mixture between minerals containing ice and salts. Dawn is set to take some more highly detailed footage of Ceres’ surface as it wraps up orbit in June of 2016.