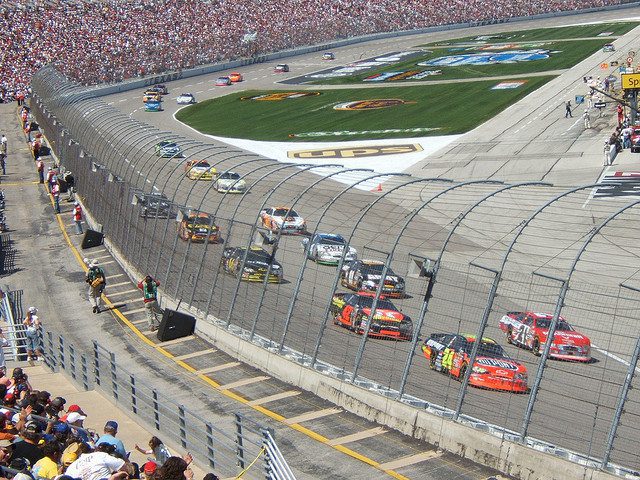 NASCAR Sprint cup All-Star Race 2015 was held at Charlotte Motor speedway in North Carolina, and Denny Hamlin was declared the winner. NASCAR stands for the National Association of Stock Car Races. At the start of the final 10 laps there was a required pit stop, in which all tires had to be changed on the cars, which is called ‘clean air’, which Hamlin was able use it to come in ahead of Kevin Harvick. Hamilton’s pit crew was able to get him back on the track first. Before the last segment Saturday night he was able to win what is called the pole. Which is the first starting position. Hamlin said it was a major home run, how the crew was able to hit on out of the park like they did.

Hamlin was born in 1980 in Florida. He was brought up in Virginia, and now he lives in North Carolina, and is reflected as a megastar in the NASCAR Sprint cup All-Star series. When he is not on the racing circuit, NASCAR’s Sprint cup winner enjoys out-door sports, and internet racing groups. When he is not spending valuable time with his family, he is CEO of the Denny Hamlin foundation for a children’s hospital in Virginia, for kids from the time they are born to age 21. It is a specialty hospital of specific medicinal, and healing aids which focuses on five main areas, which are psychology, physical, and Occupational therapy, as well as communication, and verbal therapies.

In 2006 he was the first beginner driver to succeed in qualifying for the pursuit of the Sprint All-Star cup, and has succeeded in doing so every year he has driven the NASCAR’s Sprint cup, the highest level race. 2006 was also the year he first drove his stock car in the Budweiser shootout, and won twice that season, and was continuously winning all through the NASCAR Sprint cup race series. Hamlin’s best season was in 2010 when he won eight races, and just missed grabbing the title. In 2014 he succeeded in qualifying for the finals type competition round of the chase for the NASCAR Sprint cup, almost winning his very first entitlement. Hamlin is highly thought of by everyone who knows of him, as a top candidate to win the NASCAR Sprint cup series every year.

The NASCAR Sprint cup All-Star consists of 110 laps, and he led the race for 26 of those laps. Hamlin told reporters that it was his most prevalent win yet, he had not been able to keep Harvick at bay for a couple of years. Hamlin gave due credit to his FedEx crew for keeping him in contentions the whole night, and he said they took it up a notch when they really needed to. Qualifying for ‘the pole’ earlier that evening was a big help, because Hamlin was able to get a nice lead from it, but a minor mishap caused him to slip behind Kasey Kahne. He was able to make a pit stop for adjustments, but he continued to have problems, there was a minor vibration that caused him to slip even further to eighth place, and in the next section he had to start at the 19th position.

Dave Rogers the crew chief, changed up the strategy to give them a little edge. He told the crew to change the right side tires only on the pit stop before the mandatory four tire pit stop. It worked out well, changing only two tires put Hamlin in second, and he would finish that section in third behind Kurt Busch, and Kevin Harvick, coming in for the final mandatory pit stop, Hamlin put his stock car in reverse before he was stopped.

Hamlin races for the Joe Gibbs racing organization, his win for 2015 was the first NASCAR Sprint cup All-Star race win for them.

NASCAR Sprint Cup All-Star Race 2015 Winner Is Denny Hamlin added by Katherine on May 18, 2015
View all posts by Katherine →