NBA Championship May Be in the Hawks Future 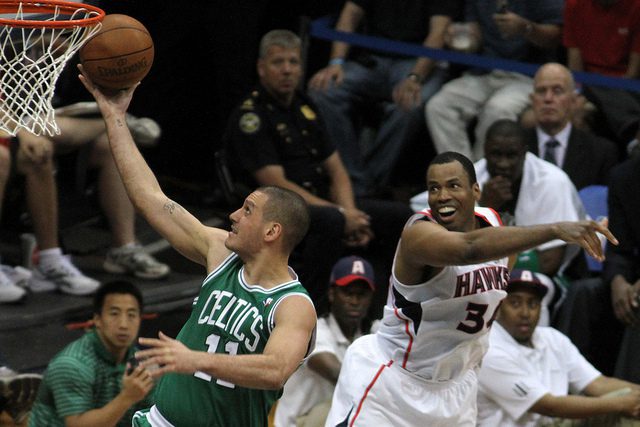 It has been four and a half decades since the Atlanta Hawks have been to the Eastern Conference finals, and had even a glimmer of hope of the NBA championship in their future. They had to climb out of a rut they were in, put on their game face, and are now ready to fight the Cavaliers for a shot to go to the big game. On Wednesday night the battle begins. The fans waited so long to see it happen, and the Hawks delivered so far, now they must keep it going. The players kept their momentum going by staying motivated, and put the focus on teamwork and their fans. After the trouble their coach caused, and then putting in for indefinite leave of absence, the team was able to come together, and exceed everyone’s beliefs, and a future which could lead to the NBA championship.

Atlanta has played the year with strong team work, they beat the Washington Wizards not by going one on one, but working together. DeMarre Carroll had his teammates back, and was able to deliver the lead, and the Hawks won over the Washington Wizards. A half a second more of game time, and Paul Pierce would have taken that win away with a tie, but he could not get the shot off before the buzzer, and Atlanta won the semi finals. A future NBA championship has been a pipe dream for more than four decades for the Hawks, but now it could be possible.

In spite of all their hard work, the hawks are considered the underdogs going in to the finals. The four-time MVP player LeBron James, is said to be the best player on either team, however he faces what is said to be the best team, can James diminish the future dream of the best team by taking the NBA championship out of their future? Atlanta fans have faith in what the team can do together, and believe the NBA Championship is in the Hawks future. James’s fans believe that he has proven himself. This next up and coming series looks to be a sit on the edge of the seat nail biter again. According to Carroll the team wants to win it for the fans who have faithfully supported them, and is a must-win for them. The 28-year-old scored over 20 points Friday night against the Wizards, and seized 10 rebounds for the his team.

The Hawks will have home court advantage in the first two games of the series, than it is off to Cleveland. The momentum of the fans drives a teams determination, and helps keep them motivated, which is why announcers of any sport always put emphasis on the home court advantage. Carroll appears to be the kind of player that looks to the fans for that inner strength. Carroll told reporters that an NBA championship for the fans in the very near future is justified. Carroll stated with out the fans they would not have made it to the finals. The Hawks clearly want to prove to their fans how much they mean to the game, and James is clearly looking for MVP title number five.

Since last summer Atlanta’s fate has been up in the air, that is it could have gotten worse, but instead they played hard, and stuck together. The team won 60 in a row, and are at the conference finals for the first time in just under half a century. The fans have a reason to cheer, but the Hawks till have to take one game at a time. There is still a lot of pressure on them to perform.

Although both teams have momentum, the support of their fans, and the skill, the one who will win the finals will have to want it more than the other, because each team in the championship has the skills to get there,now the one that can handle the pressure will go all the way. In order to have the NBA championship in the near future, it will have to be the thing the team wants more than anything else, because not only the fans are counting on them, their future with the team depends on their ability to perform on the court. If the Hawks can handle it better than the Cavaliers, then the NBA championship is more than possible in their near future.