Nepal Tragedy Calls for U.S. To Aid in Relief Efforts 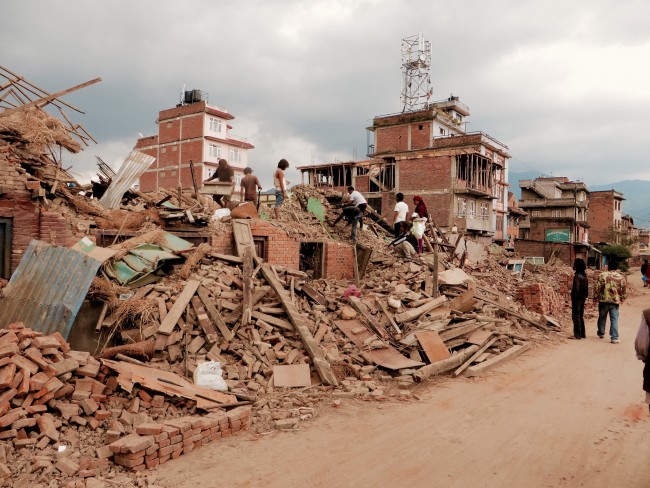 Nepal experienced a devastating earthquake on April 25, 2015. The South Asian country, whose total population is 27 million people, currently has a death toll of more than 7,000 people and an injury report of more than 14,021. The earthquake reached 7.8 on the Richter scale. The U.S. has responded to the Nepal tragedy by aiding with relief efforts.

Impassable roads, destruction of villages, death and injuries are on the rise, as more bodies are being dug up from under the debris. 100 U.S. Marines, two helicopters and four Ospreys with the ability of vertical take off are currently in Kathmandu helping with food, shelter, search and rescue. Additional, aid of six aircrafts is due to begin flights on Monday, which will consist of search and rescue teams going to the remote areas. The country is also receiving relief supplies and shelters.

The landslides and poor weather conditions have prevented the delivering of aid to the isolated areas. As search and rescue teams continue their efforts in locating for residents in the hill areas of the country, death tolls will continue to rise. The vast majority of deaths were in Nepal, but there were about 100 casualties that were found in the neighboring areas of China, India, and Bangladesh. For this reason, the tragedy calls for the U.S. to aid the country in the aforementioned various relief efforts.

There is still so much work to do to get to the bottom of this devastation. There were villages full of housing communities that were totaled. As a result of this horrendous catastrophe, there has been a tremendous amount of human loss and suffering, with millions of nationals who are homeless and numerous people still missing.

Financially, $415 million is needed for emergency funding. An estimated three million people need food assistance and half of those need it immediately. As a result, this disaster has caused about 300,000 houses to be destroyed. It will be very difficult for the Nepalese people to rebuild their homes and their country without the immediate assistance of other countries. The U.S. is currently aiding Nepal with relief efforts by sending food and medical assistance, as well as search and rescue teams. Finance Minister Ram Sharan Mahat has sent out a desperate plea for help from other nations to rebuild his country. He has asked for financial resources and technical advice.

It will take a lot of time to recover physically and emotionally from this life changing event, with many efforts being put into rebuilding homes, lives and a country. Financial resources, medical resources, food assistance, and shelters are some of the critical needs. Helping millions of people who have lost everything is a vital factor. The lives that were taken can not be returned, but there is still time to save the lives of the people who have survived. There were some miracles that came with this unfortunate event, the police rescued a 101-year-old man under the rubble of his destroyed home. The man was alive and has received medical treatment. The relief efforts supplied by the U.S. to Nepal in the wake of this tragedy have been helpful, but still not enough. More countries will need to jump in and help, more money will need to be raised, more shelters will need to be made available, more food supplies will be needed, and finally more manpower will be required to help start building homes and cities.