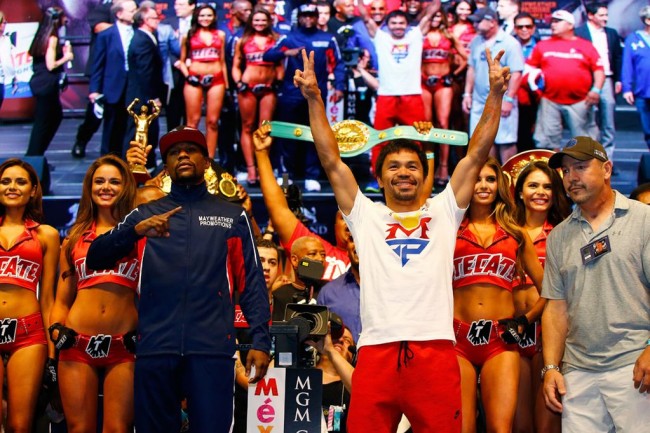 Respected fight official Joe Cortez has said that though Floyd Mayweather Jr. is not a dirty fighter by nature, his elbows need to be watched very closely. Cortez, who has refereed four of bouts involving Mayweather Jr., and more than 170 world title fights, has warned Kenny Bayless, who will be the referee in the ‘Fight of the Century.’ He has said that Bayless will have to keep an eye on Mayweather Jr.s elbows in his bout against Manny Pacquiao.

Cortez, who is from Puerto Rico, has said that if Mayweather Jr. tries to raise his elbows, Bayless will need to be on guard to make sure that Pacquiao does not suffer a cut. Cortez said this while talking to media and he did clarify that he did not mean that Mayweather Jr. is a dirty fighter by nature. However, when an opponent starts getting to his head from in the front, he is bound to raise his elbows to try to defend himself. Cortez went on to say that Bayless will need to be extra cautious and careful that when Mayweather Jr. raises his elbows, he does not cut Pacquiao. If this happens, it will force the bout to be stopped with Mayweather Jr. being disqualified.

Cortez noted that a disqualification would be disastrous for the sport of boxing as this bout has garnered worldwide attention. Boxing is once again looking up and a fair fight is the need of the hour. Cortez visited the press tent and the 70-year-old Hall-of-Famer was immediately mobbed by reporters. He also said that he remembers the four bouts of Mayweather Jr. that he had refereed in. Cortez said that he thinks Mayweather Jr. is the best counter-puncher. He said that he has a great defense technique and is an intelligent fighter. He is also clearly one of the most stylish fighters in the ring. Cortez agreed that Pacquiao will have to work hard to try to solve Mayweather Jr.’s style.

Cortez has also refereed in seven fights of Pacquiao including his bouts against Ricky Hatton, Juan Manuel Marquez, Miguel Cotto, and Shane Mosley. Bayless, 64, has been a professional referee for close to 24 years now. He has been the referee in more than 100 title bouts. He refereed Mayweather Jr.’s first fight against Roberto Apodaca of Mexico in 1996. He is also a former boxer and a physical trainer.

Pacquiao’s trainer Freddie Roach said that he was happy with Bayless’ appointment as the referee. Roach said that Bayless is the best referee in the business t the moment. He also expressed his approval about the appointment of Glenn Feldman, Dave Moretti, and Burt Clements as judges. Roach also mentioned that he thinks that the judges and referee are the best in the business and that it would certainly guarantee a fair fight. Former boxing champion Oscar de la Hoya had earlier said that Bayless always favored Mayweather Jr. However, Cortez has clearly warned Bayless, the referee of the ‘Fight of the Century’ to watch Mayweather Jr.’s elbows very closely during the fight especially when he is cornered.