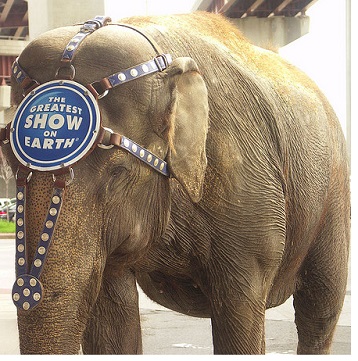 On Saturday, a 65-year-old man was stomped to death by a circus elephant which either escaped from its quarters due to an unsecured gate or by intentional means. The German man was walking in the woods for his regular morning stroll near Buchen when he was viciously attacked by the African elephant. The 34-year-old elephant named Baby was captured and returned to the circus; reportedly Baby will be returned to the wild in his homeland.

According to Yvonne Schmierer, Heidelberg police spokesperson, Police are now investigating the killing. They are in search of information pertaining to the elephant’s release from the secure enclosure and why Baby acted so aggressively towards the victim. Joyce Poole, elephant researcher, and a number of colleagues have spent years studying the disruption of complex elephant social structures.  Their finding suggests that elephants and other animals may suffer from post-traumatic stress disorder (PTSD) much like humans. Poole stated:

I have always believed that these are elephants who have suffered some severe trauma at the hands of man. An elephant whose family members are killed by people is unlikely to forget it very quickly—just as you or I wouldn’t forget if an elephant killed a member of our family.

Researchers have long compared elephants to humans. Not only are they known for their massive size, but also their long trunks, large ears, and extensive memories. Elephants are very intelligent and have amazing memories. It has long been stated when a person has a good memory, they have a memory like an elephant.

Elephants rely on memory to survive. It has been reported that the animals are able to recognize and track the locations of as many as 30 companions at a time. In 1993, during a severe drought at Tanzania’s Tarangire National Park, a study was performed surrounding three herds of elephants which found, not only did the elephants recognize one another, but also recalled routes to alternate water sources and food. Reportedly in 1999, two elephants remembered each other after being separated for twenty years.

Another comparison between elephants and humans is they have very strong emotions and are very compassionate. They feel and demonstrate feelings of sadness, anger, happiness and frustration. They also, reportedly, grieve very much like the human species. They tend to each other’s wounds and seek to comfort others when they are grieving.

Poole’s research supports that much of an elephant’s behavior is acquired through social learning. If a matriarch has encountered a bad experience with humans, her behavior will adjust accordingly, becoming more aggressive or fearful. This, along with other research, has investigators seeking answers as to why Baby attacked the German man on Saturday morning. News of the attack has garnered many comments. One comment came from a man named Derek Williams, who stated:

I do not suppose being locked up in a circus and forced by whip to perform party tricks for a sea of circus gawkers by human beings exposed the elephants all that well towards human beings.

I was doing some research on elephants, and they do hate humans for caging and brutally using them in the circus acts, or in a zoo. Elephants don’t forget things, more especially the bad things vamped upon them by humans. I imagine the animals feel just as sad and angry being caged-up as humans would.

In a study co-authored by Poole for the journal Nature she noted the African elephant society has been victimized by mass deaths and social breakdown from system killing in order to control populations. These animals, in turn, have displayed symptoms associated with human PTSD.

Baby, the African elephant, may have had unreleased anger which exploded when PTSD and the elephant’s memory of home collided. The man, as was his custom, was walking in the woods for his morning stroll in a town near Southwest Germany when he was viciously attacked by the escaped circus elephant. The investigation into the 180-pound man’s death by the massive 34-year-old elephant is ongoing.