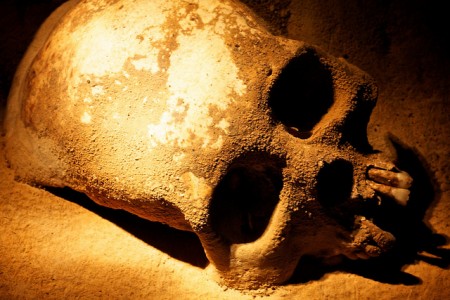 First Peoples, the PBS original series, traces humanity’s journey through the first homo-sapiens in their quest to populate the world. The series explores how humanity has populated almost the entire globe over the course of 200,000 years.

Using the human genome, a gene map of all of humanity, scientists and historians are able to more accurately retrace the steps of people’s ancestors and their origins, as well as pre-historic hominids who may have lived alongside humans in early Europe and Africa. In addition to the study of human DNA, rarely discussed archaeological evidence reveals new pieces to the puzzle of how humanity populated the globe in pre-historic times. This evidence that includes finding the wreckage of sea-traveling technology used over 20,000 years ago, in the deepest parts of the oceans off the shores of the Gulf of Mexico. The question remains, though, as to where these people came from.

This, as well as many other provocative questions will be answered and discussed during the series. First Peoples, the PBS Original Series which traces humanity’s journey has five parts, airing for five consecutive Wednesdays starting on June 24; it will be broken down by continent, starting with America and Africa in the first episode, and concluding with Europe in the final episode. The original series First Peoples also attempts to answer the question of whether the drive and desire to explore can be found in human genetics. This is done by comparing the activity of present-day humans earliest ancestors, to those of Neanderthals and other hominids who lived alongside homo-sapiens.

The series also introduces viewers to the oldest human skull found on each continent respectively; this begins with Eva, the name given to the first human skeleton found in the Yucatan, the peninsula of the Gulf of Mexico, also including the Woman from the Tam Pa Ling in Asia, and the Mungo Lady in Australia. The series First Peoples will also explore and speculate on life for the peoples living in these areas, discussing the technology and wisdom of these ancient peoples and cultures. As well as this, the PBS original series First People will trace the journey of humanity from the start of time till now.

The series also tackles controversial issues in the scientific community; such as, the biological nuances of species, exploring and comparing the differences in skull formation, biology, and even human activity between populations of homo-sapiens on different continents. This specifically revolves around Africa, where the first humans as known today made an appearance. The series suggests that many instances of hybridization and interbreeding between human population groups, referred to as “species” by the writers of First Peoples, went into crafting the modern man and is also responsible for the diversification of race and ethnicity.

The series also unravels the mystery of the 8,000 year old Kennewick Skeleton, which was discovered in Washington State and caused controversy over its ethnic origins due to the fact that the facial features of the skull displayed both Indo-European and ancient American features. The series concludes that the skeleton was a native to the Americas, specifically South and Central America, and was of the indigenous ancestry of today’s present-day Native American tribes.

One need not be an expert or necessarily up to date with the scientific status quo of human origins, because the series goes into these topics with great detail and is accompanied by substantial special effects thorough reenactments, as well as a lush and beautiful soundtrack.

The series, which airs Wednesday, June 24 at 9/8c, will begin in the continent of America, which has raised concerns over ethnocentrism and also historical confusion given that the Americas was the last place to be settled by humans. Those interested in education programs such as this are ecstatic about First Peoples, the PBS original series which traces the journey of humanity.

Arstechnica : PBS “First Peoples” tracks our arrival on every continent

New York Times: ‘First Peoples” finds the drive to explore in our DNA