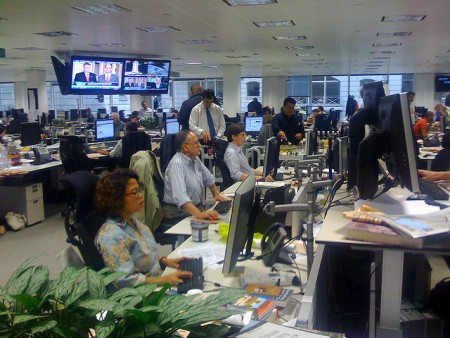 Google will bring out its digital news initiative – the News Lab, in order to empower innovation by connecting technology and media. The company will collaborate with business people and journalists to help shape the future of media by offering its tools and Google data to media people.

While Google is trying to organize the world’s information, Los Angeles Times said news publishers previously criticized it for scraping their sites and using their information for free. Now, it helps newsrooms make sense of available information. News Lab offers tools and data sets while featuring tutorials so journalists maximize Maps, Fusion Tables, and YouTube while being updated on what people are curious about with Google Trends.

As Internet company states, this era of information recognizes the importance of delivering the truth that brings power, helps leaders make wise decisions and keeps societies informed and free. The Internet has changed how information in the news is created and distributed. In its effort to make quality information accessible everywhere, the Internet Search firm ensures that news innovation leads to a more informed and democratic world.

Google brings out its digital news initiative in the form of News Lab, and considering its technological tools and hardware, the company has indeed a lot to offer to news reporting. Journalists from all over the world can access tutorials on products created for the news world at g.co/newslab. The company will make available online, video tutorials and case studies which highlight best media practices. While news products are being developed, Google will update the resources to keep the people in the news world up to date. For the media, they can follow Google on Twitter, Google+, or via YouTube subscription.

Last week, the Search firm announced its update of Google Trends, the platform that gives journalists a wider, deeper and real-time data as the platform has a daily feed of curated news trends based on headlines. The company is also collaborating with partners to build programs that help imagine the future of news and to empower new media voices.

The Mountain View, California firm backs up the rise of media startups as it worked with Matter and Hacks/Hackers. The former is a media accelerator in San Francisco while the latter is a global group of journalists and developers. Its partnerships with startups provide financial backing, as well as a mentorship with its engineers to help organizations grow. Furthermore, it holds TechRaking summits with Center for Investigative Reporting, like hackathons that focused on the creation of investigative tools, such as online databases and drones.

The Search titan partners with Storyful social news agency and rolled out YouTube Newswire, which has aggregated and curated feed from news events published on YouTube. Initiatives are taken to support and verify the videos as well.

With mobile technology, anyone can be a reporter and there are programs focused on that as well. It makes sure that anyone can contribute to the news and that user-generated news is game-changing and positive. With regard to citizen reporting, there are three projects – YouTube Newswire, First Draft, as well as WITNESS Media Lab. These projects make open platforms like YouTube as useful and first-hand venues from citizen reporters worldwide.

News Lab teams with media people in the U.S., Germany, France, and U.K. as a start, as well as the Mountain View, The California-based company also powers the training of its research arm in Europe. Google now brings out its digital news initiative via News Lab, to engage its platforms and technologies in the media space. The evolution of both media and technology, with the cooperation of both journalists and technologists, will make a more informed world.