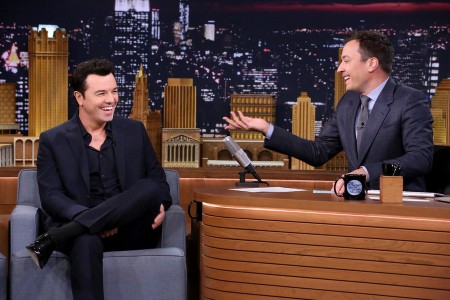 Jimmy Fallon, host of The Tonight Show Starring Jimmy Fallon, injured his ring finger on his left hand early Friday morning, causing the cancellation of the taping of the Friday, June 26 show. Fallon underwent minor surgery and his left hand is heavily bandaged, leading to the taping cancellation. He had previously planned to be off the next two weeks, which will give his hand time to heal up.

Many of Fallon’s fans have speculated as to how the Tonight Show‘s host finger got injured. He has stated, through tweets — apparently typed out with his right hand — that he is now “fine.” His injury occurred, he said, when he tripped and fell at his home and his ring got caught on a table’s edge. According to TMZ, Fallon, 40, tweeted that he practically ripped his finger off.

Fallon, who does a weekly comedy bit called “Tonight show Hashtages,” making up topics for fans to send in related tweets based on them, added a couple of his own hashtags to the end of his tweet. The hashtags that he mentions often become rapidly trending topics. At the end of his tweet, he wrote “#drugged #blessed.” He also thanked his fans for their “good wishes.”

Some fans who do not buy this explanation think that Fallon might have fallen, as he said he did, but that drinking was possibly involved in the accident, from a night out on the town he had with his guests after the taping of Thursday night’s episode of the Tonight Show. Other people have even commented that perhaps Fallon gave his wife reason to be jealous, and she went after him with pruning shears, actually aiming to cut something a bit lower down on his anatomy.

Both of these explanations are only suppositions. Fallon is a very entertaining and talented comedian, actor, and talk show host, and a family man with two baby daughters. There is really no reason to doubt that his explanation, that it was a freaky sort of accident. NBC has not yet mentioned any further details or updates about Fallon’s injured left hand.

Last night on the Tonight Show, the last new episode that there will be for the next two weeks, Fallon’s two main guests were actor Mark Wahlberg, who stars in the upcoming comedy flick, Ted 2, and Glee actor and author, Chris Colfer. The shows musical guest was Morrissey.

On Friday night, the scheduled guests were going to be magicians Penn and Teller, Taylor Kitsch from the HBO series, True Detective, and actor, film producer and film director Benicio Del Toro. Also, Tonight Show fans look forward to Fridays, in particular, as that is when Fallon does his weekly “Thank You Notes” comedy bit.

Now, instead of the originally planned new episode, NBC has scheduled a rerun to air on Friday night. People who had tickets for Friday night’s show will reportedly be contacted by NBC and will be given information about rescheduling.

Fallon almost always tries to look at the bright side of things. In his tweet about his injury, he wrote that the fact his fall was stopped by the table was “a good thing.” However, the table’s catching up his ring and causing the painful injury to his finger, he tweeted, was “a bad thing.”

The Tonight Show host was spotted by a reporter from TMZ at Scalinatella, where he had dinner the night before the injury to his finger occurred. He graciously chatted with fans and had his picture taken with them following his meal

Though the injury to Fallon’s finger caused the cancellation by NBC of the taping of Friday night’s Tonight Show episode, the good news is that the show’s host is doing fine and he will have plenty of time to recover before the show airs new episodes again in two weeks. The staff of Guardian Liberty Voice wishes him a speedy recovery.