‘Maze Runner: The Scorch Trials’ Sets Fire to the World 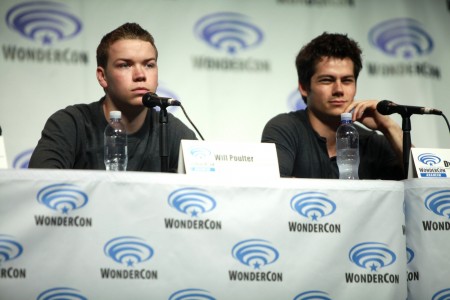 Last year, The Maze Runner took audiences by storm with another book to film production. The story surrounds a group of young adults thrust into an above advanced technological maze of monstrous proportion, forcing Thomas to drastically change the lives of his new-found friends and enemies. With a September 2015 release date, Maze Runner: The Scorch Trials sets fire to the world as Thomas and his companions realize that their true test of survival has only just begun.

Dylan O’Brien, most recognized for his role on the popular sci-fi series Teen Wolf, reprises his role as Thomas in Maze Runner: The Scorch Trials. as he continues to uncover even more lethal layers of the human experimentations. After discovering that the maze surrounding the Glade was part of an experiment meant to test the limits and abilities of genetically altered children, Thomas motivates a handful of followers to help him find a way out. With mechanically enhanced Grievers roaming the maze and injecting a deadly poison into the runners, Thomas loses many friends and makes even more enemies as he is determined to get to the bottom of these sadistic trials.

Maze Runner: The Scorch Trials picks up where that first installment left off. The team of renegades discover a secret group of individuals said to help them, post maze escape, only to discover that they are still part of a much larger experiment manufactured by W.I.C.K.E.D, the organization that started them on this dangerous path. Aiden Gillen, famed for his role on Game of Thrones, joins the cast as Janson who manipulates Thomas and friends into thinking they are safe. In an attempt to escape yet another prison, the team venture outside to discover that the world around them has become a desert wasteland. A city of sand surrounded buildings and a ravenous sun that is sure to be the death of many of Thomas’ companions, Maze Runner: The Scorch Trials is sure to set fire to the world this Fall.

Yet again, fans of the book and moviegoers, who enjoyed the first installment, differ in opinion. Fans of James Dashner’s literary contribution say that the film (however exciting) can not compare to the book itself. Perri Nemiroff, contributing writer for the Collider, says that there just is not enough time to delve into such a multidimensional world that any book of fantasy or sci-fi genres can create. Though Nemiroff says that he greatly enjoyed the first installment of the franchise, with its graphics, cinematography, and solid acting, there were key components the book simply did much better at conveying.

An example, according to Nemiroff, was the tension between Gally (Will Poulter) and Thomas in the first movie. The Collider writer says, “…there’s no mention of Gally’s memories of Thomas prior to their time in the maze.” A fact that many book fans agree add to the intensity and depth between the two characters. Many agree that the film did not delve deep enough into that back-story or give enough room for film watchers to really grasp why Gally and Thomas were at such extreme odds. Needless to say, Nemiroff speaks the mind of many who prefer the book, however, still enjoy the movie.

Fans and critics alike have made one major agreement, movies (unless given proper time to develop the story) will never be up to par to a book’s original creation. Unless things are done in the vein of a Harry Potter or Lord of the Rings, readers who watch movie adaptations of their beloved literary devices are prone to note the differences and must take the movie for what it is, an hour and 20 minute adaptation to a world that can span decades and millennia on written page. Maze Runner: The Scorch Trials is said to set fire to the world this September in theaters everywhere.