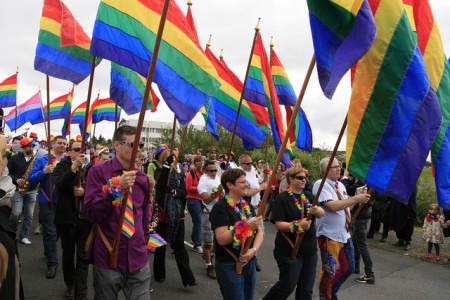 The San Francisco Gay Pride event went off seemingly without a hitch until the end of the event when four shots were fired into the crowd. The shots were fired around 6pm, hours after the parade had ended. Police stated that the shooting was unrelated to the event, and was caused because of a dispute between two young men who were quarreling near the United Nations Plaza where the event was winding down. The victim of the shooting was a 64-year-old bystander, one of the vendors at the event, who happened to be standing several feet away from where the argument took a violent turn. He was taken to San Francisco General Hospital. The wound, a gunshot to the arm, was not fatal.

The scene was briefly chaotic as people screamed and ran, unsure of how to assess the situation. Police responded immediately and several arrests were made and at least three firearms confiscated from the scene. The crime scene was cordoned off by the San Francisco Crime Scene Unit.

The San Francisco Gay Pride Parade is held annually to celebrate solidarity between the LGBT Community and its straight allies, and to inhabit and co-opt space that is normally used by what queer groups deem as “heteronormative society.” The parade is also held as a memorial for those affected by hate crimes and for AIDS victims. It is the largest such gathering in the nation. This year was special because of the recent ruling made by the Supreme Court that struck down all bans made on gay marriages; thus making marriages between gay people legally recognized nationwide.

The first pride march was held in New York City in 1969 and has since spread all over the world. The festival is held throughout the month of June, which is recognized as LGBT month worldwide. Many countries participate, including Japan, South Africa and many Asian and European countries. The celebration includes various festivals, concerts, rallies, speeches, and culminates in a large parade on the last Sunday in June. People from all over the nation and the world come together to celebrate and walk the route up San Francisco’s Market Street from 10am to 3pm.

The shooting at the San Francisco Gay Pride event was an anomaly at the festival, which is generally peaceful. A wide variety of activities such as film festivals, sporting events, and celebrity performances from people such as Lady Gaga, the B-52s and the Backstreet Boys, are featured during Gay Pride month.