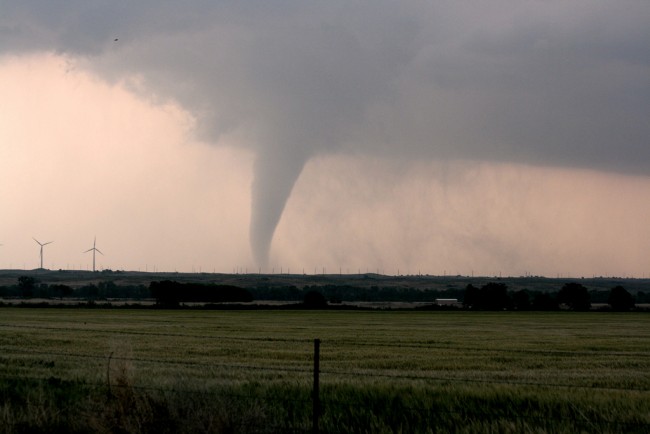 Strange and rapid changing weather is plaguing the midwest. In the past month or so, severe weather such as violent thunder and lightning storms, flash floods, hail and tornadoes have been tormenting Colorado. Some individual streets have even experienced hail the size of baseballs. The National Weather Service says there is more to come.

Parts of Colorado are dealing with flash flooding after heavy rain and violent lightning. A few neighborhood streets in and around Denver had four-foot deep areas of hail. Some of the streets appeared to be covered in snow due to the baseball-sized hail that had pelted the area. The hail buried cars and filled over 30 dump trucks with ice. Belen Gonzalez, a resident of the area, said the weather was scary and she does not understand why the hail only fell on their street. Her husband expressed that it was like a huge prank. 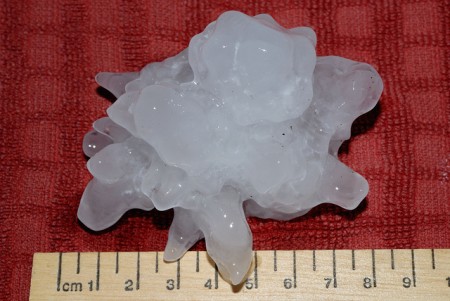 The downpours in Colorado created a sinkhole that was 20 feet wide and 15 feet deep. Sgt. Greg Miller from the Sheridan Police Department was unable to see it through the rain and drove his SUV into the sinkhole, but was able to escape by crawling out the vehicle’s window and onto the roof to pull himself out onto the street. Sgt. Miller expressed that he was glad that it happened to him instead of someone else. He was not injured. Friday afternoon, a crane was able to remove the SUV from the sinkhole.

Other places among the states have also experienced sinkholes and loose ground, due to weather. Places in Oklahoma are unable to be traveled on because of mud and air pockets within the mud. This creates a situation where pressure placed upon those areas poses danger to anyone who walks or drives over the areas, as they can certainly turn into sinkholes, if too much pressure is placed on top.

Several tornadoes have also been sighted and seven touched down in Colorado, announced the National Weather Service. A tornado has not been seen in the area for 30 years. In Berthoud, 40 miles north of Denver, Alvin Allmendinger and his family got to the bottom of the basement stairs as a tornado tore the roof off their home. They remained in the basement as hail pelted the inside of the home and down the basement steps collecting approximately two inches in an hour. The rain was also coming through the floorboards over their heads. No one was injured. At least three homes were destroyed in the same town and 25 homes were damaged.

Luke Koldewyn of Johnstown, said that people who have lived in the area for 50 years have not seen any weather of this sort. His parents’ modular home was demolished by the tornado. Koldewyn found Luna, the family dog trapped under the rubble, but uninjured. He said, however, that she was so scared she would not move and did not want to get out of the rubble.

In the eastern plains of Colorado, near Simla, six homes were destroyed by a tornado, according to Elbert County officials. Another tornado touched down Friday afternoon but did not cause any damage before lifting again, reported the National Weather Service. 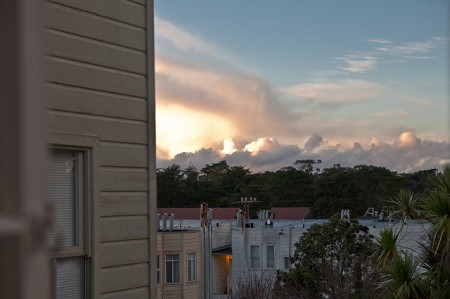 Over seven inches of rain fell in the foothills of the Rocky Mountains. This area endured severe flooding in 2013. Lyons, Colorado had a three-foot-wide fast and heavy flow of muddy water through the town and the yard of Tamara Vega Haddard on Friday. The torrent of water took large flagstone blocks from the terrace in the yard and carried them 60 feet away. Water also leaked into her basement but she was glad she did not have to evacuate and her kids could finish off the school year without changing districts. She added that the big disasters have given her greater perspective, referring to the devastation in Colorado two years ago.

This has all happened over 72 hours and there more was predicted to come. The National Weather Service has the eastern part of Colorado under a tornado watch and flood advisories to the northern part of the state. Over the next two days, Colorado is expected to experience the same severe weather patterns again. There will be violent storms, hail, floods and possibly more tornadoes as well.

Northern Colorado rivers are high from the melting snow and unusually high rainfall, which is increasing the flood rate in the area. Colorado can expect more storms today and tomorrow, starting in the mountains and then moving across the plains in the afternoon, stated a report by the National Weather Service. The storms will bring more hail as well as thunder and lightning and strong winds that will create the risk of tornadoes.

Violent storms rolled from Fort Collins in the north down to Pueblo, 180 miles south. Lighting bounced across the sky as heavy rains fell on Denver overnight. These storms are a result of the El Niño anomaly in the Pacific Ocean, which is an upper-level jet stream and low-pressure system combined, currently over southern California. The combined factors are carrying moisture from the Gulf of Mexico to Colorado and southern Wyoming. 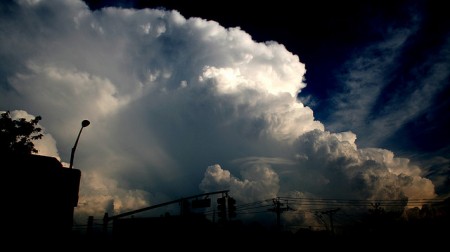 Lusk, Wyoming experienced flash flooding before dawn Thursday. The flood washed out the bridge on the major road through Lusk, a community of 1,500 people.

Texas and Oklahoma are still experiencing floods this week while other towns, such as Wimberley, are cleaning now that the waters have begun to recede. Flash flooding has covered Dallas with more rain to come. In Texas, 70 counties have been declared a state of emergency. 3.5 trillion gallons of water has filled the reservoirs in Texas, enough to cover the entire state in eight feet of water. The state went from emergency drought circumstances to extreme flooding emergencies. Nine people are still missing and 30 lives have been lost, so far.

Oklahoma, Texas, and Colorado have had severe weather before, but the frequency and violence of these storms seems to be getting stronger in those areas. Overall it seems that the midwest and southern parts of the U.S. are experiencing severe weather like tornadoes, hail, and violent storms, that do not look to be subsiding any time soon.

The severe weather is not over. There will be more violent storms, possible tornadoes, and hail as the flooding continues in the midwest. The devastation continues across the states. Texas is no longer experiencing drought conditions anywhere in the state, but now they are experiencing emergency flooding and mass destruction to their cities. Colorado is seeing more severe weather than they have ever seen. Oklahoma is use to tornadoes but not of the severity that they have been.

The severe weather patterns will be moving across the country, according to the National Weather Service. New England, New Jersey and other parts of the east coast will also be experiencing severe rain, with possible flooding, and of course as the East Coast often experiences, hurricanes may too be plaguing coastal states soon. This means that Texas, Oklahoma, and Colorado may soon not be the states experiencing the worst of the severe weather.