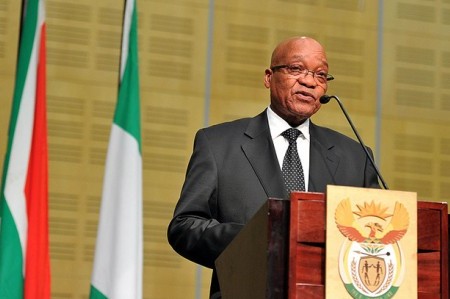 Does South Africa have a good news story to tell? Not yet but if elected officials are held responsible for actions, then a good news story can develop. The leaders of the country, the African National Congress Party (ANC) see matters in black and white and as long as this is maintained no problems will be fixed.

The economy of the country has taken a turn for the worse, and continuing to look at matters through black and white does not fix the problem. The economy is based on trust and investment. Nobody has confidence in South Africa due to high levels of corruption and crime. The new affirmation action Black Broad-Based Economic Empowerment based on the color of skin and no real qualifications does not help the growing crisis. The people need to stand up and demand change.

What is the plan of the ANC government? Over the past 21 years, there has been the constant looting of the country’s resources financially, killing of Afrikaans farmers and turning South Africa into a Zimbabwe-style land, barren and cold. Rainbow nation, indeed not so, there has never been the diversity of unity among the different cultural groups.

The United States and European Union should impose sanctions on the ANC government for the grand theft of funds. The real news story is that South Africa is run by a criminal government. The law abiding and good citizens cannot sit back and let the country slip into a total abyss of unruly hooligan style governance. When will the people stand up and say enough is enough? It is time to stand up to this tyranny.

The middle-class citizens and probably the biggest contributors to the fiscal via income tax might be educated enough to understand the dangers of the direction the political powers are heading toward yet continue to ignore the plight of the poor. It is the vast majority and incidentally the biggest voter base that does not have the ability to comprehend what is best for a collective future for all South Africans.

It is the black elite of South Africa that have a spectacular future while there is nothing for the majority. All the corruption, nepotism and socialism of this elite black group need to deflect the attention to a scapegoat so that the majority remains unaware of the evil deeds performed. The wealth and accumulation of assets need to remain hidden from the masses, the 62 percent that keep the ANC in power. When the poor rebel in the form of protests against the unfair society and frustrations boil over it is not directed at the black elite, it is targeted at the scapegoats. Whites are already viewed by a significant sector as thieves of black’s wealth, racist, oppressors of the poor, unpatriotic and less deserving to live. The scene is well set for genocide.

The ANC is a black party for the poor and does not deserve to lead based on the struggling of the masses who do not learn, have no food to eat and have no economic benefits. The old leaders of the ANC, Hani, Mandela, and Tambo all loyal and patriotic toward the ordinary people are gone, and the new leaders continue to inflate the poverty of the masses. Thabo Mbeki former president said whites had too many jobs, complained about the wealth of whites, and said the imbalances must be corrected. It is evident that socialism lies in the heart of the ANC government.

The masses do not see the poverty, the crime, the corruption raging through the country. All the masses know that there is freedom to wander off around the country without harassment. The racial segregation is gone yet the overwhelming dislike of the white population is twisted with hatred. The masses remain ignorant of the ANC’s determination to attain a two-thirds majority for the government to change the constitution.

There is the belief that Africa belongs to Africans only and that the West is an enemy bent on dividing the people into a neo-colonialism agenda. As the years of ANC rule roll by so does the voice of division and hatred grow among the diverse ethnic groups of South Africa.