‘Teen Wolf’ Sets Out to Provide a Dark Senior Year 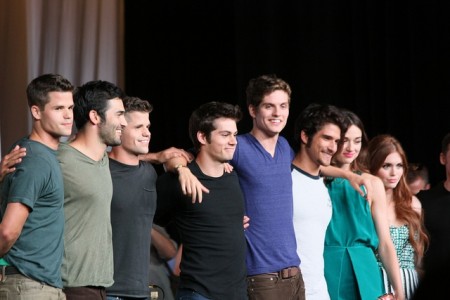 Teen Wolf sets out to provide a dark senior year for its characters, if Monday night’s season 5 premiere is any indication. Tyler Posey, the main star of the MTV show, said this season will also be the goriest yet. “It’s really gross, and I guess that gives it a dark tone. It’s definitely dark, but it’s just gory.” Posey said.

The darkness of this season’s Teen Wolf is attributed to several changes in the show this year. First, a new group of villains called The Doctors were introduced in the premiere. Second, a new mysterious guy named Theo was also brought into the series. The only hint to Theo’s purpose so far is Posey’s comment that Theo will have a significant role in the dark storyline. The only known facts about the character is that he is an old friend from Scott’s past, and that he wants to be in Scott’s pack. In the premiere, fans were teased with the mystery surrounding Stiles, when all participated in the senior tradition of writing his initials on the shelf. However, fans were not shown Stiles’ full initials, so that is a mystery to be resolved later. The only clue is that Stiles’ first name sounds like a word that would describe the character.

The senior ritual also allows for some recognition of other characters, namely Derek, played by Tyler Hoechlin and Alison, played by Crystal Reed. The camera shows those characters’ initials, proving to be an emotional moment for fans. Other characters no longer in the show also received a tribute, as Lydia remembers them while in Eichen House. The truth was that her friends died, a tragedy which starts this season off on a sad note, as Teen Wolf sets out to provide a dark senior year for the group.

The Teen Wolf’s season opener, titled Creatures of the Night, did have its normal amount of scare involving a wolf man with long claws, which pursues Scott to gain the teen’s true alpha powers. While the sheriff said that was impossible, the pursuit provided for some thrills. The scene proves the point that Beacon Hills is a supernatural place for strange creatures and all things weird.

Posey said season 5 centers around Scott trying to keep his pack together, as well as dealing with Theo in the process. He will also be more vulnerable than ever, because somehow Scott’s world will be thrown into disarray, and he will end up broken. The season’s storylines will also include the emotional journeys of the various characters, as well as how they move through their senior year and into adulthood in Beacon Hill.

One of the biggest changes involves Lydia. Although Lydia has had strange things happen to her, she has not seen the dark world of Teen Wolf through the eyes of knowledge. Posey said she will get an introduction into that world during this coming season. While the storyline is not the biggest one on the show, Posey described it as the coolest element in this installment.

Other storylines will continue throughout this season. Scott will continue his search for Desert Wolf, and will interact with Parrish this year. Those who like the character of Derek may be disappointed, as he will reportedly not be as visible on season 5. This is due to Hoechlin no longer being a regular on the show; however, the plan is for him to return later on in the season.

Teen Wolf is setting out to provide a dark senior year for its characters, and will likely continue to spook, enthrall and intrigue fans with chases, mystery and memorable characters. The show ranks #6 on Twitter, and averages 1.7 million viewers in the 18 to 49-year-old category. It also garnered attention in its third season, for producing a higher than normal amount of episodes with, 24 airing that season. The show airs at Mondays at 8 p.m, on MTV.

E!Online: Teen Wolf Season 5 Has Arrived We are already afraid of everything

‘Teen Wolf’ Sets Out to Provide a Dark Senior Year added by dareing.m on June 30, 2015
View all posts by dareing.m →