Confederate Flag Is the American Swastika for African-Americans 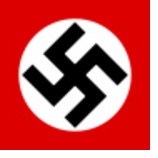 flag has come front and center since Dylann Storm Roof entered a church with the intention of killing black people. The flag which Roof seemed to idolize may not have been the driving force behind his heinous hate crime, but many feel its underlining message may have influenced the shooter. In a place where black life is treated callously, it is not surprising that a white supremacist felt like it was acceptable to commit acts of unspeakable violence.

The Confederate flag which symbolizes hate has appropriately been called the American swastika for African-Americans. The swastika is a powerful symbol which had positive meanings for centuries. After the Nazis used it to murder millions of people, it has taken on a meaning of death and hate.

Thompson understood what the flag meant, as did the Confederates and Roof. Many believe right-wingers who defend the flag as a heritage, know exactly what that institution of legacy represents. The President of the South Carolina League of the South, Pat Hines, appeared on CNN to defend that so-called heritage. He said:

Getting rid of the flag was moving to do cultural genocide on the Southern men and women.

Cultural genocide is the systematic destruction of traditions, values, language, and other elements which make a one group of people distinct from other groups. This suggests as long as the Confederate flag flies high, South Carolina’s government is sending a message of segregation. In the wake of nine lives lost to a hate crime, displaying this flag is as if the government is telling the world the black lives do not matter and have no significance in the state.

Why is a flag which symbolizes the American swastika for African-Americans still standing? Many were shocked and utterly amazed to see this flag as loved ones mourned Roof’s nine victims. Cries have gone up across the nation for South Carolina to cease displaying a symbol of white supremacy and slavery on the grounds of a government building in the aftermath of a terrorist attack on African-American church members. It seems some politicians are having a hard time saying so, but South Carolina’s Governor found the courage to say she is in favor of the flag’s removal.

Roof’s actions and love for the Confederate flag have been the source for angry protests rising up within the state. One demonstration included hundreds in which a banner with the names of Roof’s victims was hung on the balcony of the Confederate Museum. Outrage has spilled across the nation with a petition of more than 300,000 signatures demanding the flag be removed. Many believe these actions have forced Governor Nikki Haley to speak out. The question people are asking is, “Will she back up her words with action?”

Recently, Mitt Romney stated the Confederate flag is a symbol of racial hatred and requested it be removed in honor of the victims. President Obama agreed and stated the flag does not belong on a pole, but in a museum. National retailers such as Amazon, Wal-Mart, Sears, and eBay have joined the ban against the Confederate flag and will remove merchandise depicting the symbol.

Racism is not just a South Carolina problem, it is alive and well in institutions at every level in America. Removal of the flag will not solve the problems associated with race relations, but it will serve as a step forward for any institution wanting to send the message that black lives matter. It is time to remove the Confederate flag which symbolizes hate, more than heritage. The flag depicting white supremacy has appropriately been called the American Swastika for African-Americans.

Social Worker: Why isn’t that racist flag already gone?
About Education: The History of the Swastika