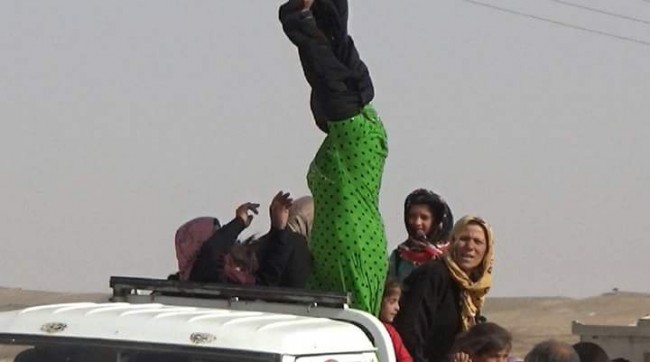 Women escaping from ISIS captivity have been casting off their burqa, symbolizing freedom from oppression and the tyrannical rule of Islamic caliphate. The women were overjoyed and in an outburst of emotions, cast off the black, long Abayas that they were being forced to wear for life under ISIS. The women were successful in finding a way out of Islamic caliphate, or more precisely, the territories that are presently under control of the extremist group called ISIS or ISIL. Photographs of women who succeeded in getting away from a life of slavery and suppression were posted by and shared on social media by Jack Shahine, a freelance journalist.

Women from different religious backgrounds were seen casting off and throwing away their black Abayas once they reached the YPG checkpoints, the areas controlled by the Kurdish People’s Protection Units. The woman on the blue car wearing the brightly colored red dress is Kurdish, whereas the one on top of the white car is Arab. Reporters on the ground in the war zone have informed that the pictures were taken as these women crossed borders and went into safer territories. However, the exact location and context of the images have not been verified yet.

It has been reported that wearing the loose, long black outfits called Abayas, has been made compulsory for women living under the control of Islamic State. The outfit is worn to ensure that it obscures any outline of the woman’s body. As per reports, after the terrorist group felt that some of the Abayas actually revealed the outline of the bodies of women wearing them, the Abayas were especially designed with double-layered veils. Meanwhile, women fleeing from ISIS captivity have been throwing away their burqa as they enter Kurdish controlled territories.

ISIS uploaded a 10,000 word manifesto online about the life of women living under the militant group’s control and how the women are being treated. This document revealed the shocking belief of ISIS, that it was legitimate for its fighters to marry girls as young as nine-years-old. ISIS also talked about the apparently sedentary role that women must be restricted to, as mothers and wives. The manifesto declared that once women get married, their appointed role is to remain veiled and hidden and maintain society from behind the curtains. 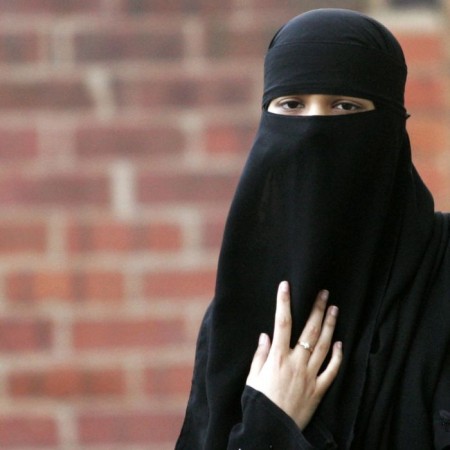 A closer study of the reason behind women being made to wear a specific outfit has come up with interesting results. Today, it is said that Muslim women from all over the world wear these garments as part of their faith. Such a sweeping generalization is often incorrect. As per the study, the hijab is used to cover a woman’s hair, neck, and chest; a Niqab covers the face but has an opening for the eyes; an Abaya is accompanied by a Niqab and is a loose long black robe; a Chador is a loose, full-length cloak. The burqa is an outfit widely worn by women in Afghanistan, and it covers a woman from head to toe with a small mesh section near the eyes for allowing the wearer to see.

It was also found that such head coverings and veils have a longer history across various traditions, cultures, and religions. For example, veils were worn by rich and sophisticated women in the Mediterranean societies, and head-dresses along with full body coverings were worn by Zoroastrian women in the past. The Jewish traditions related veiling to modesty and covering a woman’s hair with a scarf is still practiced by some, but it is rejected by liberal sections of Judaism. In Christianity, references to veils and head scarves for women are found in Apostle Paul’s letter to the Corinthians. Head coverings are commonly seen in some conservative groups in Christianity even today.

There is a bit of ambiguity about the mention of veil and hijab in the Holy Quran and its interpretation. There is a debate among Muslim scholars about any dress code being applicable in today’s world. Almost every Islamic extremist group though, including ISIS, does make these coverings compulsory for women. In the mean time, women who are successful in escaping from ISIS captivity have been casting off their burqa, symbolizing their freedom from oppression of Islamic caliphate.