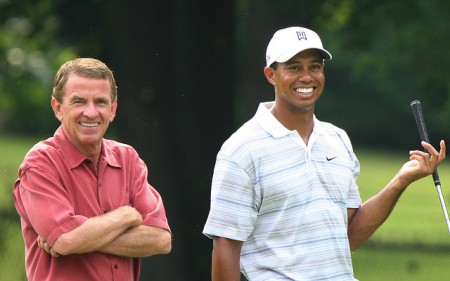 Tiger Wood’s showing in this weekend’s golf games gave no sign of his quitting anytime soon. He kept his score under 70 at Greenbrier Championship for the first two rounds, and even when things started to look bad for him, he continued to work hard for a more acceptable score. This could be a sign of good things to come for the golf pro.

Woods started out a little shaky, but eventually found enough of his grip to produce a better score then previous outings in the beginning of the tour. At the first tee, his shot was 30 yards right of the fairway, but he did not let his concentration break, and he was able to come in under par for a first round of 66. This score placed him in the top 35, which is a much better ranking then he had been in before. He was close to the lead, but also close to being cut. He finished the day better than his last time out, but he was still unhappy with how he played, and  did not talk to the press afterwards. Even with a couple of bogeys on the day, and despite his struggles, Woods showed no sign of calling it quits anytime soon.

During his last outing, he had nothing working for him, and his score of 80 reflected it. The eleventh hole was a bit of a problem for him, but he held it together and finished well enough to continue on to the weekend. He finished up his second round of this tournament with a 69, after answering a couple of bogeys with birdies. It was not the best of Woods, but it certainly was not the worst. He barely made it out with a decent score, but everyone enjoyed seeing him start to get back on track. Even if he did struggle, it was nice seeing him play more like himself.

Woods, who does not normally speak to the media after a disappointing performance because he feels he does not deserve praise after poor play, did not speak to anyone after the match. However,the golf pro needed Thursday’s and Friday’s scores, even if there was nothing special about them. On Saturday, July 4, he answered his three bogeys with four birdies and finished two holes under par, which shows he is not quitting anytime soon. He did not give up all weekend and he played like the champion he is.

There are only two championships left in the 2015 golf season, and if Woods would have been able to continue playing as well as he did in the first round, he would have come close to finishing in the top 10, but this time it was not meant to be. The media has speculated on his performance and what he needs to do, but Woods himself never wonders publicly about his performance on the course, and usually objects to anyone else attempting to make predictions on his golf game. He would not be happy at the comments from the media. Woods finished the Fourth of July with a 71 in the third round, and although it is disappointing, it is better than the two 80s he got earlier this year.

Woods did have his work cut out for him, though, and needed to concentrate on keeping his golf swing strong during this tournament. There were several players who were playing very well, and were definitely stiff competition for the golf pro. However, Woods has shown no signs of throwing in the towel, and no plans of quitting anytime soon. He still has what it takes, and Woods will not quit until he is ready to do so.

ESPN: Tiger Woods continues to bounce back at Greenbrier classic

Tiger Woods Shows No Sign of Quitting Anytime Soon added by Katherine on July 5, 2015
View all posts by Katherine →