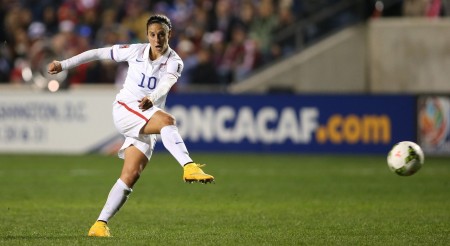 Midfielder Carli Lloyd has had a Bend It Like Beckham moment at the FIFA Women’s World Cup Final Title game between USA and Japan, presently live from the BC Place Stadium, Vancouver, Canada. Lloyd, the captain of Team USA, has definitely been in the best form of her life in the game until now. The game has just completed its first half and has been a cracker of a contest between the two top teams in women’s football.

The United States team started with a bang right from the beginning with Lloyd scoring twice in the first five minutes. Her first goal came in the third minute while she scored again in the fifth minute of the first half. This put Japan on the defensive with them trailing 0-2. Lloyd’s best goal till now though, has been her third goal of the match which she scored in the 16th minute. She scored from close to half line in a Bend It Like Beckham moment when she caught the Japanese goal keeper out of her position and scored from 54 yards away.

Until now, the scores stand at 4-1 with USA leading. Midfielder Lauren Holiday from the USA scored in the 15th minute. The only Japanese goal was scored by the 27-year-old Forward Tuki Ogimi in the 27th minute. Before this final game, Japan had concede only three goals for the entire tournament. Fireworks are expected in the second half of the game as this is being considered a revenge match, after Japan had defeated USA Women’s Football team in 2011 FIFA Women’s World Cup Final 3-2 on penalties after the game was tied at 2-2.