Diet Pepsi’s Sweetener Is Fizzed Out 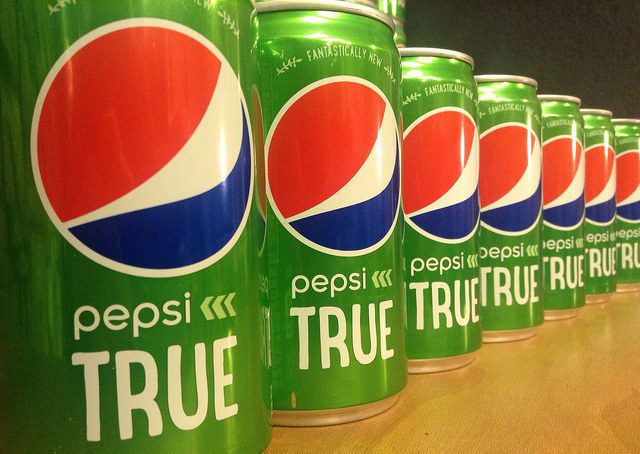 The limited number of investigations regarding artificial sweeteners have completed tests with an “inconclusive” grade after consumers reported that the substance was the root cause of a variety of medical conditions. Diet Pepsi’s sales dropped 5.2 percent last year because consumers started to repel aspartame. In 2013, the European Food Safety Authority pitched in with a 263-page report of their findings of the substances’ effects. The U.S. Food and Drug Administration has also been investigating the effects of various artificial ingredients used in food and drinks, especially the artificial sweeteners that manufacturers add to diet sodas. Both studies that have surfaced so far have claimed aspartame was harmless. Like with the additive MSG, consumers claim artificial sweeteners like aspartame cause a variety of unpleasant and possibly dangerous symptoms such as headaches, pain, heart rate changes, depression and anxiety, tumors, and an increased risk for various cancers, to name a few. These concerns are one reason that Diet Pepsi’s sweetener is fizzed out and will be replaced with Pepsi True, which will use an all natural sweetener, Stevia.

Diet Pepsi’s sweetener is fizzed out because of research into artificial ingredients’ side effects, like that published in the journal Nature, for example. Facts also are being uncovered about the accuracy of the “diet” label on soft drinks that use aspartame or sucralose. Susan E. Swithers, a professor of psychological and neurological behavior sciences, says, “routine consumption of diet sodas, even one per day, can be connected to higher likelihood of heart disease, stroke, diabetes, metabolic syndrome, and high blood pressure.” Soda drinkers can also experience fatigue, poor concentration, irritability, and brain cloudiness because each beverage dehydrates the body. Also, the phosphoric acid in all soft drinks attacks tooth enamel, and the artificial sweetener tricks the body into responding as if it were real sugar in the first ten minutes of consumption. This in turn spikes insulin levels at the 20-minute mark, leading to the activation of fat storage mode. Furthermore, soda can potentially drain the human body’s essential minerals, which encourages more sugar cravings. Many soft drinks, including Diet Pepsi, that contain aspartame also contain caffeine, and this double stimulant combination can lead to addiction according to Professor Susan E. Swithers, Nurses’ Health Study, Health Professionals’ Follow-Up Study, nutritionist Gina Keatley, dietician-nutritionist Lisa Moskovitz.

Society naturally puts down all brands of soda because they are classified into the same category as “junk food,” meaning they are not healthy and can rot tooth enamel, etc. When it comes to artificial sweeteners, though, there is confusing information. A bottle of Diet Pepsi shows conflicting information on its label. The product is marketed for people who are dieting, watching their caloric intake and/or trying to be healthy. The opposite idea appears in the list of ingredients because the bottle says “aspartame,” among a variety of other man-made ingredients. This means consumers are forced to choose between fewer calories and less chemicals. Pepsi True will come out soon and will be both free of both calories and artificial sweeteners.

Companies like PepsiCo want to protect their income and higher image by attempting to appeal to the customers who do not believe their claims that aspartame and other additives presently in the company’s sodas have no chance of research proving them to be a threat to consumers. Manufacturers also want to produce a drink that tastes good, so a replacement they considered was sucralose (another artificial sweetener) because some think it tastes more like actual sugar. In the end, they decided to go with a pure and natural additive. The all natural, zero-calorie sweetener, Stevia, is starting to hit the shelves in different vitamin and electrolyte-enhanced drinks, and PepsiCo has recently formulated a new soda, Pepsi True, which substitutes Stevia for aspartame.

Diet Pepsi’s sweetener is fizzed out, but will be replaced with another sweetener to revive the drink’s once positive reputation. Nutrition scientists, experts, and safety regulators are looking into the healthfulness claims of sweet, carbonated beverages that are used to reel in customers and keep them coming back to the products. Even though all facts and studies in these areas are not certainties or completely accessible, the controversy that has been bubbling up so far has decreased Diet Pepsi’s sales enough to make PepsiCo change at least one potentially harmful artificial ingredient.

In the Black: The Pickiness Epidemic: When Eating Right Goes Wrong
Yahoo Health News: What One Can of Diet Coke Does to Your Body in One Hour
Business Insider: Diet Pepsi Is Dramatically Changing for the First Time in 30 Years
Naturally Savvy: This Is How Msg, Aspartame and Saccharin Sweet Talked Their Way into Your Food
Naturally Savvy: The Dangers of Aspartame Poisoning
Photo Courtesy of Mike Mozart’s Flickr Page – Creative Commons License