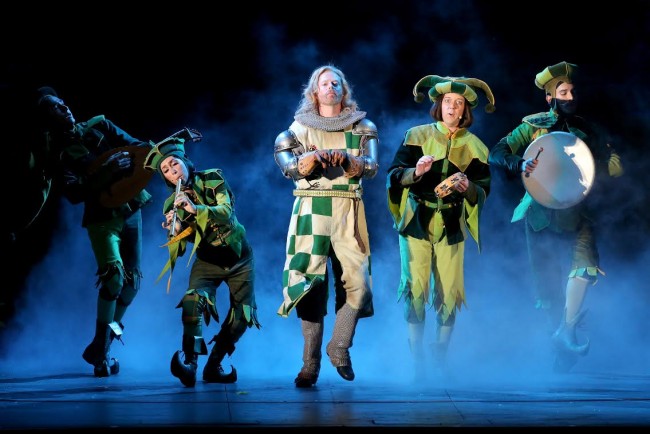 Stock filled with Monty Python silly humor, parodies of Broadway musicals, as well as clever moments, the staging of Spamalot on Friday at the Hollywood Bowl offered a witty, fun evening with visual gags and some amazing performances. Also at the Bowl on Aug. 1 and 2, the show, which won the 2005 Tony Award winner for Best Musical, was updated for the unusual outdoor setting. But, this staging is basically the entertaining Eric idle creation that enjoyed over 1,500 performances on Broadway and has been staged repeatedly worldwide.

The show is based on the 1975 movie Monty Python and the Holy Grail, which skewers the legend of King Arthur, Camelot and his band of knights. Along their journey to find the “Holy Grail,” they encounter typically Pythonesque eccentric characters like rude, insult-spewing Frenchman and the Knights That Say “Ni.” The music includes Python bits like the Finland/Fisch Schlapping Dance and Life of Brian’s memorable song, Always Look on the Bright Side of Life.

Newer aspects are Arthur’s Vegas-style kingdom (“What happens in Camelot stays in Camelot”), complete with showgirls and gaming; the beautiful Lady of the Lake and her Laker Girls (which obviously appealed to the L.A. crowd); and an in-the-closet prince waiting for rescue from marrying a female (“Find your male, that’s your grail.”).

If that was not enough of a plot, there are musical or dancing tributes to or skewers aimed at other Broadway shows. They include Funny Girl, A Chorus Line, West Side Story and Fiddler on the Roof. The show also makes fun of trite Broadway love songs with The Song That Goes Like This (and lyrics such as “Once in every show, there comes a song like this. It starts off soft and low, and ends up with a kiss.”). There is also a send-up of Barry Manilow with His Name is Lancelot, reminding older audience members of Manilow’s Copacabana. 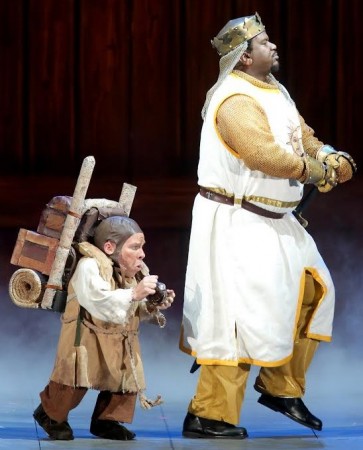 Updated jokes mention the California drought, the Bowl crowd, Caitlyn Jenner and the surrounding Hollywood Hills. In her Diva’s Lament (What Happened to My Part) show-stopping moment, the Lady of the Lake now rages about Taylor Swift versus 10 years ago when the reference was Britney Spears. The leader of the Knights That Say “Ni” delivers the verses of Bruno Mars’ Uptown Funk as a crowd-loved stream of consciousness bit.

The Hollywood Bowl has been staging a weekend Broadway musical for several years now featuring casts filled with Broadway (or London West End) veterans, television stars and some creative casting. The cast of Spamalot follows this trend with Craig Robinson from The Office, Warwick Davis (Harry Potter, Willow but also Spamalot in the West End of London), Merle Dandridge reprising the Lady of the Lake role she played in New York, Jesse Tyler Ferguson from Modern Family and Eric Idle himself.

Ferguson, Dandridge and Davis delivered three standout performances in Spamalot with gusto on Friday. Ferguson played Sir Robin, the musical theater fanatic knight. Dandridge was phenomenal as the sexy, spunky Lady of the Lake and delivered her solos (and duets) with panache. Davis was a scene-stealing delight as  Arthur’s sidekick, Patsy, with his singing and dancing and his comic expressions that demonstrated his acting ability far more than playing an Ewok, Griphook or even his brief HBO series.

Robinson – reportedly the first African-American to play King Arthur in a professional staging – was jovial and good. But his voice, okay when singing with the males, was outmatched in scenes with Dandridge.

A beautiful evening in an outdoor amphitheater will help most people “look for the bright side of life,” but an entertaining and engaging show makes it easy to have a good time. For those in L.A., there is more witty fun at the Hollywood Bowl with performances tonight and tomorrow of Spamalot.

2 Responses to "Witty Fun With Spamalot at Hollywood Bowl"