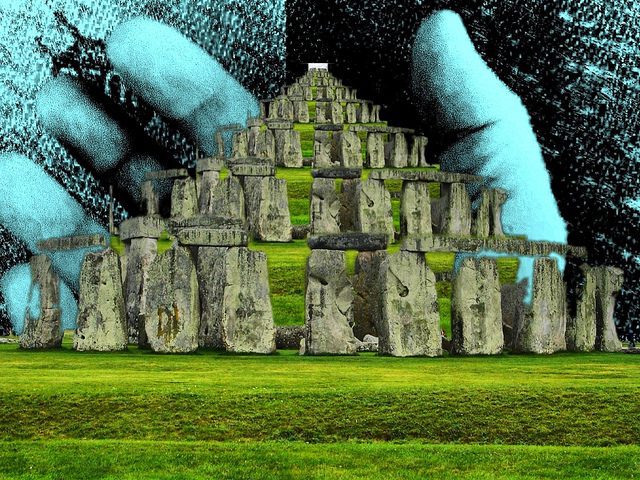 Stonehenge has been toppled by big brother. It was announced Monday by the University of Bradford that they had discovered a monument of about 100 stones in the vicinity of Durrington Walls henge which encompasses several acres. Mysterious? Extraordinary? Extravagant or pragmatic? Super-henge they call it. This discovery is changing history and the way one sees the Salisbury Plains. Evidence shows that changes must be made in the way the ancient world is seen. USA Today reported that Paul Garwood, archaeologist and lead historian on the project at the University of Birmingham, told CNN,

Everything written previously about the Stonehenge landscape and the ancient monuments within it will need to be rewritten.

This horseshoe shape neolithic structure, extraordinary in scale, was discovered by ground-penetrating radar, a remote sensing technology called geophysical imaging. The stones are preserved underneath the ground, as evidence shows them to be three feet underneath the bank. One hundred stones, some toppled over or ripped out and some still stand tall, as tall as 15 feet are there. The stones are most likely sandstone, like the upright ones above ground in the area. Though, said to be around 4,500 years old, they may likely be much older. About two miles from the famous henge stone structure, in what is known as the Salisbury Plains, stands what now is known as the greatest pre-historic complex in Europe, this mammoth megalith. Stonehenge Hidden Landscape Project, which discovered this “big brother” is headed by University of Bradford’s professor Vince Gaffney.

It is called Super-henge.  Does anyone really know what a “henge” is? The word is rather strange and it became more peculiar and odd by looking into its definition. The Online Etymology Dictionary defines it like this: “Some antiquarians suggest the notion may be of ‘supported in the air, that which hangs in the air.'” The slant of this article develops from this definition.

Maybe these places were huge cities where ancient dwellers had all types of the structures necessary to support an empire of highly civilized people, including airports. Why is this so difficult to consider? The whole area could have been the site of where “big brothers” from the sky landed their craft; perhaps that is why henge means “that which hangs in the air.” This new discovered circular structure, dubbed by some as Stonehenge’s “big brother,” toppled the original Stonehenge because most likely different sizes of structures were necessary to accommodate the various size ancient craft. The smaller of the “air” ports was simply discovered first.

Scientists are still not sure what purpose Stonehenge or these other enormous structures played in the lives of inhabitants who lived in those days. Some believe it to have been some kind of an astronomical calendar for determining the movements of the planets or observation of the sunlight at certain times of the day. Others have suggested the possibility of these stones to be some kind of a temple where intense spiritual rituals were performed or special initiations took place. Perhaps it was a cemetery of sorts? According to Daily Mail-UK, evidence of piles of animal and human bones have been found in the area; archaeologists have proof of houses too. So perhaps some areas were delegated as cemeteries. Who knows what more they will find. As an exploratory point of view, consider the ancient place “air” port – landing stones.

The druids were a part of those regions, remember? Maybe they were areas of importance for specific celebrations by those in high places of power; who knows. Maybe they were temples of healing, like a spiritual therapeutic center of sorts where the ill were treated with herbs and laser technology, and midwives delivered babies. This particular speculative point of view is that they were ancient airports where a huge saucer-like craft of the ancient astronauts landed. Remember the definition of a henge,  “Supported in the air, that which hangs in the air.”

A new discovery has toppled the way the world now sees Salisbury Hill’s landscape, and one cannot deny that good old Stonehenge has been dethroned by its big brother – Super-henge. With much of its ancient history yet unknown, this highly revered complex, with stones still remaining underground, silently declares that a greater mystery has yet to unfold.