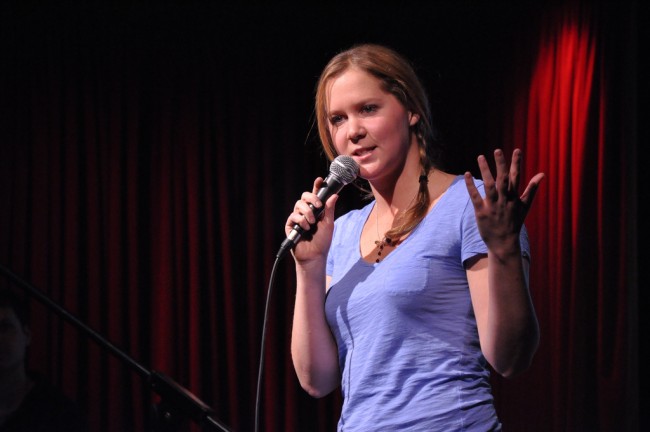 According to media reports, Amy Schumer has been accused of stealing sex jokes from the late comedian, Patrice O’Neal, who passed away in 2011. Her recent show, Amy Schumer: Live at the Apollo, which aired on HBO on Oct. 17, 2015, is reported to have included parts of jokes “familiar” to some told by O’Neal from 2006 and 2007. The 34-year-old maintains she is a big fan of the late comedian and would never consider stealing “anyone’s jokes.” As a result, other comics have rallied behind the stand-up comedian, saying that lifting material from others in their industry is the same as “borrowing,” and should not be seen as stealing.

The Trainwreck star is alleged to have used jokes from The Nasty Show by O’Neal in 2006 and 2007. During these shows, the iconic comedian described a number of sexual positions with strange names ranging from the Gorilla Master to Poltergeist. Schumer’s recent HBO special seemed to contain bits similar to those of O’Neal. Nonetheless, Schumer, who is a big fan of the late stand-up comedian, denies the allegation. The comic told TMZ,  “I would never steal anyone else’s joke.” She also posted on Twitter, “I have never seen that Patrice bit,” and added she would never tarnish her image by stealing a joke at “this stage of my career.”

According to The Hollywood Reporter, the rising star is set to receive $5 million for her new film. The untitled comedy, set in Brazil, will be directed by Jonathan Levin and is about a parent who is kidnapped together with her daughter while on holiday. The comic is currently polishing the script with her sister, Kim Caramele, who also acts as her stage partner. Arguably, this would be a huge pay raise for Schumer, who is accused of stealing sex jokes from the beloved late comedian, O’Neal. She pocketed $300,000 after Trainwreck, making it unlikely that the rising comedy star would risk her profile by stealing a joke. Other media outlets were a bit cautious about the accusation, writing it off as “preposterous” and not in the mold of the “talented Amy.”

Some comics have rallied behind the celebrity against the joke-thievery allegation. The comedians have supported their fellow colleague, saying the accusation is fickle and is meant to diminish the glow of Schumer’s rising star. Von De Carlo, a fellow comedian and longtime girlfriend of O’Neal, took to social media in support of the popular comic. She acknowledged the similarities in the jokes, but was quick to strike out against the validity of the claims against Schumer. According to her, the jokes were not originated by her late fiancée, but were “throwaways and experimental.” She added that O’Neal had, in fact, “learned” these sex jokes from college campuses and during conversations with other men.

Colin Quinn, another comedian and Schumer’s friend, dismissed the allegation as “ignorance.” He said it is popular culture for comedians to share the same “premise” and modify the joke. However, this is not the same as “stealing a joke.” Moreover, he stated that even the beloved, late comedian would have been happy to hear the “sister riding his bit.”

Dante Nero, who used to open for O’Neal during The Black Philip Show, also remarked the late comedian did not create those “strange sex positions,” but picked them up during everyday banter at college. In a recent post in one tabloid, Nero remarked, “If Amy Schumer is accused of stealing sex jokes from the late comedian, then people are being ignorant, for the ‘Houdini’ joke long existed even before Patrice.”