Family Faces Demons and Racist Past in Appropriate at Mark Taper in L.A. 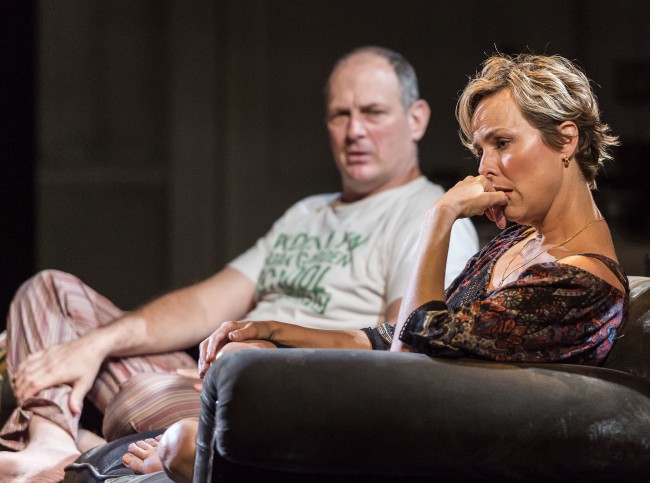 On one level, Appropriate, the award-winning play that opened Sunday at the Mark Taper Forum in Los Angeles, relates the story of a family facing demons and their racist past. On a more interesting level, it is also a play about bigotry written by a black man and performed by an all-white cast. Branden Jacobs-Jenkins’ Obie Award winning play looks at old prejudices and deeply simpering new ones that bubble to the surface as the play unfolds.

Appropriate deals with a dysfunctional, angry white family gathering at the ancestral plantation in Arkansas to dispose of their late father’s debt-burdened estate. Countless works have dealt with the familiar spectacle of distant siblings gathering when a parent dies, but this one does explore new ground when the adult children find out, to their disbelief, their recently deceased father, a Harvard Law School-educated legal scholar, was not always Appropriate. In fact, evidence the children unearthed shows, in spite of their initial denial, that he may have been a racist and member of the Ku Klux Klan. As one sibling phrased it to another, “Your youngest child walked down the stairs in my father’s hood, as if we needed more proof.”

Appropriate does make viewers think about the fact that racism, whether rationalized or denied, can haunt later generations. However, it suffers from lack of focus and too much reliance on the vitriolic older sister and an assumption the audience finds it as incredible as the characters that a Deep South plantation home that has a slave graveyard and has been in a family for five generations housed someone racist.

The play opens in the dark with the sound eerie sound of cicadas setting the unsettling tone. Franz (Robert Beitzel) and River, his New Age-spouting fiancee (Zarah Mahler), climb through a window with flashlights into a living room strewn with crammed baskets, rolled rugs, furniture and other debris of a lifetime in messy piles. A young man, Frank’s nephew Rhys (Will Tranfo), pops up from the seemingly deserted room. Then, unable to sleep, his mother, Toni (Melora Hardin), comes down the stairs. She is less than happy to see Frank as she awaits the imminent arrival of the rest of the family/cast: brother Bo (David Bishins), his Jewish wife from New York, Rachel (Missy Yager), and their offspring, young teen Cassie and 8-year-old Ainsley.

The rest of the first act deals with getting to know the fractured family and their secrets as they get ready for the auction of the property. There is Toni, the bitter divorced older sibling. She is so weighed down by the chip on her shoulder that she has alienated her son, sets about alienating the rest of the family and eventually is even hard for the audience to take. Her resentment, convincingly dispensed by Hardin, provides a central conflict around which all the other resentments spewed out swirl. This is the play’s juiciest and most repellent role, and Hardin totally sinks her teeth and claws into it.

Baby brother Franz (who was Frank when he vanished from the family years before) heard about the estate sale – but not the funeral. He is living with River in Oregon after years of alcohol and drug dependency and previous sexual misbehavior. Beitzel also has an unsympathetic character to play and weirdly overacts at times for someone who is now sober.

The first act’s ending sets the tone and topic for the second act when a photo album is discovered. When Appropriate resumes, the L.A. audience finds out that the book contained photos of lynched. Besides the family demons haunting act one at the Mark Taper, the Appropriate characters is forced to confront the possibly racist past and adjust their opinions of their patriarch. At first, Toni believes their father never saw the pictures in the clutter-filled home.

Conflicted Bo cannot believe his father was racist, but relates a story about his reaction to Bo’s black college suite mate. Yet, he is surprised to learn that the family estate has a “slave graveyard.” Rachael relates her first-hand experience with her father-in-law’s anti-Semitism. Her negative story about the father enrages Toni, who shows her hidden feelings by hurling her own anti-Semitic epithets at Rachael.

The thin plotline persists as the characters come to grips with the photos and then bizarrely discuss selling them. The album embarrasses them, but visions of dollar signs are tempting.

When the play concludes, nothing has really changed. Showing that prejudicial blood runs thick, Rhys uses an in-Appropriate epithet to describe his Jewish Aunt Rachel. They might deny its existence, but the ugly family tradition was handed down to the next generation.

Then, if the Mark Taper audience was not unsettled enough by the tormented family’s racist past and personal demons, Appropriate has a weird ending. You never find out what happens to the characters or who wound up owning the house, but the audience gets to witness as it becomes a ruin. Maybe that is Appropriate since the family already fell apart too.

Photo of Hardin and Bishins by Craig Schwartz, courtesy of Center Theatre Group