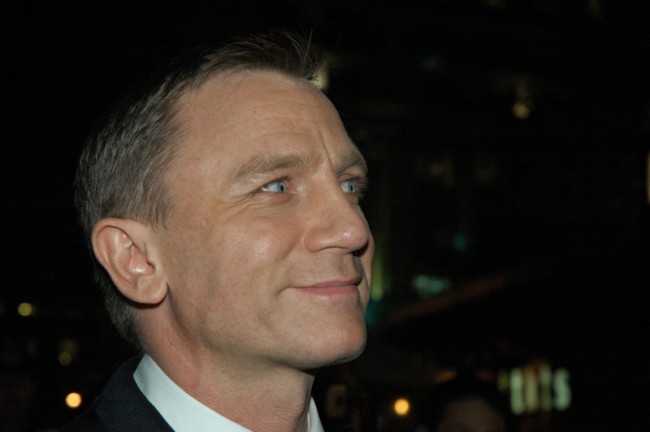 James Bond hero Daniel Craig is fed up with acting the part of the masculine character in the spy series and would rather kill himself than reprise the role. These comments were revealed by the 47-year-old actor during an interview with Time Out magazine before the release of his fourth Bond movie, Spectre. However, the comments about suicide from the steely James Bond star have been slammed as inconsiderate to those with mental health issues.

Craig had been asked whether he would consider reprising the reconnoiter role after his fourth Bond film, Spectre. In response the famous actor said, “I’d rather break this glass and slash my wrists. I’m over it at the moment. We’re done.” He went on in an expletive tone and remarked, “I don’t give a f—k” as to who shall be the next OO7. If anything, he would rather consider coming back to the franchise “only for the money.” Reports suggest that Craig will walk away with “an odd forty million dollars” for his efforts in the movie Spectre. He is also reported to be the first highest paid Bond character after having been paid $10, 7 million dollars in Skyfall. It is, however, his suicidal slur that has been a source of irritation to some of his fans.

“Is Daniel Craig okay? His remarks about playing James Bond are really gross,” read one of many tweets against his comments. Another socialite asked, “What kind of humor is this? Morbid?” With the World Mental Health Day coming on Oct. 9, 2015, some fans found Craig’s comments offensive and irresponsible. They felt that the James Bond star should not have uttered the suicidal comments as they “stigmatize” mental health and are unacceptable coming from a role model of his stature. “He should tone down his jokes and speak in an exemplary manner,” read a comment in one tabloid. Ellen Pompeo, of Grey’s Anatomy, also slammed the star tweeting, “This dude needs a reality check.”

The comments by Craig, who debuted as James Bond in Casino Royale, have piqued speculation as to who will take over as the next M16 agent role. Names like Damien Lewis, Idris Elba and interestingly Emily Blunt have been bandied around as possible candidates to become the next legendary James Bond. Emily Blunt, whose latest role as an agent is in Sicario, is also tipped to become the first woman to land the leading role in the next James Bond series. However, according to bookies, Blunt has a remote chance to beat Tom Hardy and William Hill for the role. Hardy’s part as Kray twins in Legend can sway the James Bond franchise to bring him on board if Craig’s comments are anything to go by.

Rupert Adams, spokesman for Hill, has welcomed the speculation as “massive news.” He is of the view that the Bond fans will be refreshed by a new “masculine” M16 agent. However, he was quick to dismiss the suicidal comments by the James Bond star as a joke and one that should not be taken seriously. “I know Daniel never meant to say he will ‘slash his wrists.’ Come on it’s just an industry joke. The guy just needs a break,” he told reporters at a charity event in preparation for the RIBA Stirling Prize in London. Some fans have supported Craig saying his suicidal comments were blown out of context by the media.