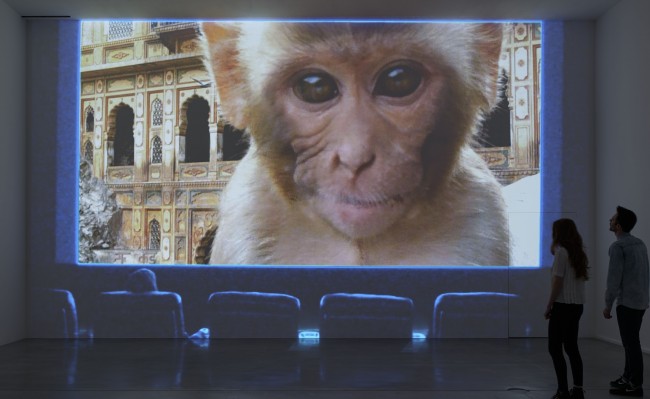 An exhibition opened this weekend at the Los Angeles County Museum of Art (LACMA) that was unusual for two reasons: the medium employed and the fact that it is the first significant U.S. retrospective focused on the artist’s work. The LACMA exhibition, Diana Thater: The Sympathetic Imagination features 25 years of her quirky, deconstructed video projects that  primarily feature nature as their subject.

The Sympathetic Imagination includes 22 works from the early 1990s to some introduced this year. The immersive installation features rooms filled with projectors, multiple video monitors and players that surround visitors with the art. The exhibit, reportedly the museum’s largest solo exhibition ever for a woman, does require some effort on those who wish to see it in entirety. The pieces are installed in three different LACMA buildings.

While it may not appeal to all, Thater’s work is very different. It reflects her evolution and experimentation. The artist was not interested in the video work being done by other artists during the 1990s. Unlike them, “I wanted to move it into the future. I didn’t want to work with narrative and theatrical pieces. I wanted to take my medium and move it further,” she added.

A hallmark of the artist’s style is the meshing of projected imagery to the specific architectural site so that viewers are immersed in the work. As Michael Govan, CEO and Wallis Annenberg Director of LACMA, put it, “Her expansive practice pulls the moving image out of the screen and off the wall, creates multiple perspectives, and merges image and architecture in surprising ways.” 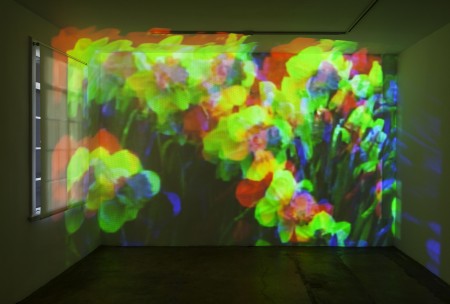 Her early pieces, Oo Fifi, Five Days in Claude Monet’s Garden, Part 1 and Part 2 (1992), reflect her childhood love of Claude Monet’s works and a six-month residency she did in France. Thater had two video cameras with her and just started documenting what she saw. Then she “pulled it apart like Monet pulled colors apart.” She deconstructed the images in primary colors (RGB) for part one and reconstructed them (sort-of) for the other. The results are interesting and almost kaleidoscopic in effect.

Her most appealing pieces included here show animals and articles in creative ways. One of her best-known works, knots + surfaces (2001), features honeybees projected in various perspectives on multicolored hexagons as they are communicating through dancing. When people wander into the room and interrupt the projection, the bees appear to become more chaotic and animated.

When people enter the portion of the Thater exhibit in LACMA’s Art of the Americas building, they encounter her Six-Color Video Wall (2000), which presents versions of the sun depicted in various colors on flickering monitors stacked together in a room filled with purple light. Shots of the sun and moon are also used in her 2008 installation A Cast of Falcons, which does not feature a cast of birds, just one at a time projected moving across the room.

The most recent piece included here is Life Is a Time-Based Medium, which she filmed at the 18th-century Galtaji Temple in Jaipur, India, that is partly dedicated to the monkey god Hanuman. She projects that façade and visitors then walk through the buildings arched entrance to a smaller room when she projects footage of wild monkeys, who gaze arrestingly at the camera. The scene also includes the projection of a row of theater seats faced the monkeys onscreen with Thater in the audience watching the creatures.

Thater said that when she studies the subject matter of her works for some time with specialists, such as spending time with chess masters for her 2008 chess pieces. But, the effort is not clear. The chess pieces are visually interesting, but do not reflect the artistic effort of some other pieces. The same with those hung in the museum’s Bing Theater area. One, Perfect Devotion Six (2006), features six video monitors that mainly show grass with tigers occasionally romping across. The Best Space is the Deep Space (1998) has 10 monitors showing a 10-second bit with an Andalusian horse bowing that is repeated over and over. Some might say Thater’s works challenge accepted realities, movement and scale, but that undoubtedly will probably not be apparent to many visitors used to traditional video art as well as two dimensional installations.

The exhibit featuring Diana Thater’s creative and deconstructed videos will be at LACMA until Feb. 21, 2016. The Sympathetic Imagination exhibit will be at the Museum of Contemporary Art in Chicago starting next October.