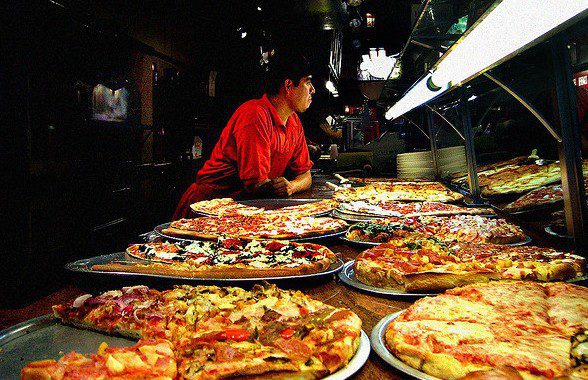 In Gone With the Wind, Scarlett is admonished not to eat too much in public because “you can always tell a lady by the way she eats in front of folks like a bird.” While a fiction work, the etiquette was factual – women were encouraged to “eat like a bird” and still tend to graze and avoid looking like they are eating a lot in front of others, partially potential partners. However, a new study shows the opposite is true for males; men tend to “eat like a horse “ and consume more food if they are eating with women.

Psychologists studying eating disorders in women have looking into the sexual selection of food quantities. But, male selection of food based on sexual interest in companions has not received much scrutiny. A small study conducted at Cornell University, and published in the Evolutionary Psychological Science journal, is hoping to draw attention to male dining behavior and how it differs from the behavior of women.

The Cornell study found that men eat significantly more food when dining with women than they do with other men. Further, the behavior was the same for unhealthy food as for healthy food.

The study, which took place over a two-week period, involved observing 105 adults (average ages were in their mid-40s) while they ate lunch at an all-you-can-eat buffet featuring Italian food. To ensure the participants provided examples of mixed-sex dining, the group consisted of 45 women and 60 men. Forty of the men dined in mixed-sex groups, whereas 20 were sitting with other men. Among the women, 35 sat within mixed-sex groups and 10 dined solely with other women. The researchers tabulated how many pizza slices and how many bowls of salad each person consumed. They also kept track of the genders of each diner’s eating companion or companions.

Before leaving the Italian restaurant, each diner was intercepted by a researcher and asked to complete a short survey. The questions were designed to indicate their level of fullness after eating, as well as whether or not they felt hurried or were comfortable during the experience. (The wanted to ensure results were not tainted by diner discomfort or other concerns.)

The research team found that men who dined with one or more female diners ate 92 percent more pizza (1.44 more slices) and consumed 86 percent more salad than those men who dined solely with other men. They did not observe a difference in the behavior of the women based on the sex of their dining companions. However, when women ate with men, they felt they overate and were rushed during the meal (even though the amounts and time allotted were comparable).

One theory the researchers had for the differences in male behavior is that “men tend to overeat to show off. You can also see this tendency in eating competitions which almost always have mostly male participants,” according to Kevin Kniffin, PhD, of Cornell University, who was the lead author of the study.  Males have a tendency to exhibit “self-disability behavior” to show off in social settings.

While this small study showed that men eat more food when dining with women, the study is limited in size and scope. Future research into social eating behaviors among males is clearly needed.