CBGB Reopening in Newark, in Name Only 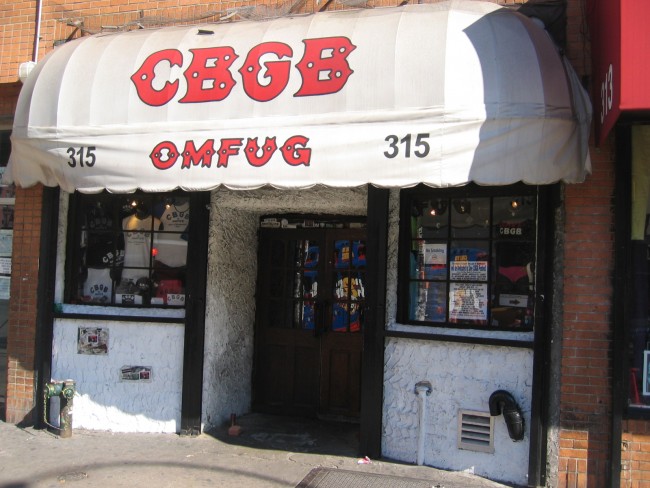 If there can be an Eiffel Tower or Statue of Liberty in Las Vegas, why does it seem a travesty to reopen legendary CBGB’s as a restaurant at Newark airport? Because the fake edifices in Nevada are obviously replicas of the real ones Gustave Eiffel worked on and are essentially faithful to the originals. The legendary New York City rock club that launched many careers but closed in 2006 is reopening in Newark, New Jersey, as an airport diner, so it will be CBGB in name only. It is another example of 1990s nostalgia gone awry.

CBGB’s was opened in 1973 as a East Village club with the intention of featuring country, bluegrass and blues artists and Other Music For Uplifting Gormandizers (e.g., C.B.G.B. & O.M.F.U.G.). But in the late 1970s, the club became a breeding ground for New York’s punk and new-wave scene. The club had little in the way of ambiance, graffiti- and handbill-covered walls, and a notoriously disgusting bathroom.

The Newark venue will clearly bear little resemblance to the original. It will be christened the CBGB L.A.B. (Lounge and Bar) and offer diners American fare in a setting that evokes memories of the fabled music venue. Think edgy version of Hard Rock Café in a sterile terminal. Odds are the music played overhead will not feature most of the acts that made the punk club famous and vice versa. While the new CBGB will open in the Newark Liberty International Airport, more locations are reportedly planned.

The new restaurant will serve Prime Rib and “Disco Fries” – Disco at CBGB? Is anything sacred? Matzo Ball soup and seared tuna are also on the menu, as are pub-dining staples. The one nod to the original namesake is a chili menu item based on the club’s founder, Hilly Kristal, and his chili dishes.

This does not jive with the original image. Often referred to as “the undisputed birthplace of punk” (at least U.S.-style), the dive is where The Ramones, Talking Heads (who mentioned the club in Life During Wartime), Blondie, Patti Smith, and many others gained renown in the 1970s. European groups, such as The Police, made their U.S. debuts there.

In the 1980s and 1990s, the club became the place to hear punk and new-wave acts. Sum 41, Green Day, Korn and dozens of other groups built a solid fan base on that stage.On October 17th, 2006, Patti Smith played the club’s final concert. In 2008, the site became a retail store featuring clothing by designer John Varvatos, which many die-hard punk fans considered to be sacrilegious.

In recent years, there was a movie about the history of CBGB. Also, there is also a CBGB Music & Film Festival in New York.

While many people (presumably many who pass through the airport in Newark) merely know the name CBGB as some rock-related initials on tee shirts. The brand still exists. It hosts a Website with information on punk bands, a history of the old club and a store to buy merchandise featuring the logo.

The “brand” is now owned by a holding company that even has contact information on the Web page for those interested in licensing rights, hence CBGB is reopening in Newark, in name only, because a restaurateur made a deal. However, odds are slim that a Newark airport restaurant could remotely resemble the original setting. Maybe it should have been in Las Vegas.

3 Responses to "CBGB Reopening in Newark, in Name Only"