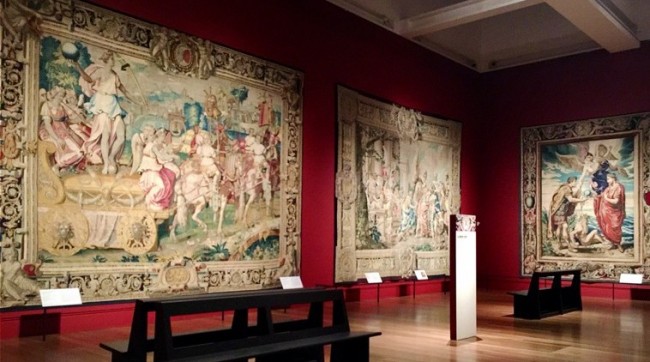 Louis XIV amassed history’s largest tapestry collection during his 72-year-reign over France. There were more than 2,650 valuable pieces, 7 times the amount in the royal collection when he assumed the throne. While most have not survived, 15 of his treasures are available for rare close-up viewing in Los Angeles at a new J. Paul Getty Museum exhibit, Woven Gold: Tapestries of Louis XIV. Timed with the 300th anniversary of Louis’ death, this is the first major museum showing of French tapestries in the Western U.S. in 40 years. Eleven of the pieces at the Gerry are making their U.S. debut and two recently underwent conservation with the museum’s support.

The Woven Gold: Tapestries of Louis XIV exhibition features the larger-than-life art works, ranging in creation from about 1540 to 1715, displayed in a manner to show how large they were, the massive effort in weaving them and the precious metal threads some contain. Eleven have never before been exhibited in the Unites States. The Getty Museum is supporting the conservation of two of the tapestries. Created in weaving workshops across northern Europe, the featured tapestries date from about 1540 to 1715.

As Getty director Timothy Potts noted, “They are big, heavy … and very precious.” Potts added that the show was made possible thanks to unprecedented loans from the Mobilier National in Paris, the French repository that houses the bulk of Louis XIV’s holdings. He pointed out, “Woven Gold offers a dazzling showcase of the art of tapestry design at the height of its technical and artistic achievement under France’s ‘Sun King.’”

Most of the tapestries traveled from the Mobilier National, which houses 600 of the roughly 700 surviving pieces from Louis’ collection. Many of the works the King accumulated were destroyed during or shortly after the revolution. Many of the monumental royal tapestries were woven with gold or silver threads, so they were burnt to retrieve the metal and enhance the depleted French treasury. A committee decided which tapestries, many of which had faded with age, to save and which to destroy, according to Charissa Bremer-David, the Getty’s curator of sculpture and decorative arts.

Louis’ textiles are organized into three groupings in the exhibition – Louis as collector, as heir and as patron of the arts. Preparatory drawings, related prints and a life-sized cartoon used as a pattern for the weavers are also on display.

Many of the tapestries in the Getty showing, like the ones in the earlier show based on works by Rubens, were created based on works of art by Raphael, Peter Paul Rubens, Charles Le Brun and others. They come from the most notable workshops in Europe, especially the French 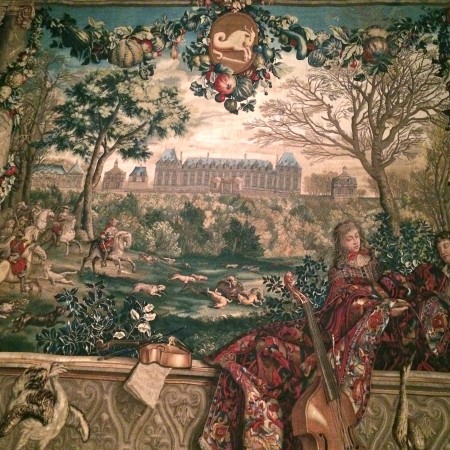 workshop at the Manufacture des Gobelins.

Creating tapestries is extremely time- and money- intensive. In 1662, the Royal Tapestry Manufactory at the Gobelins was created under Louis’ patronage to produce the works of art, and it still produces tapestries today. Some 250 of the best weavers went to work exclusively for the king back then under director and royal painter Le Brun.   (Le Brun would later transform a forsaken royal hunting lodge into the monumental Château de Versailles.)

One of the Gobelins factory’s early masterpieces was a series of tapestries telling The Story of Alexander, which was conceived by La Brun and is one of his most influential works. The Getty exhibit features preparatory chalk sketches, a cartoon drawing for one of the series of scenes developed about Alexander III, and some of the resulting tapestries. One, The Queens of Persia at the Feet of Alexander, depicts Alexander showing leniency for the vanquished royal household after defeating Persian King Darius III, and contains a Latin message about self-control in the cartouche at the bottom: “It is for a king to vanquish himself.”

France’s royal residences inspired Le Brun’s series of tapestries depicting The Royal Residences/The Months of the Year. The series features various royal chateaux, seasonal flora and fauna, and typical activities for the period. The Getty exhibit features two versions of The Chateaux of Monceaux/Month of December. The royal one is on loan from France; the other is the museum’s own version of the same scene which was woven for a private patron.

One close up look at some of the rare remaining Louis XIV tapestries at the Getty offers an immediate understanding of how monumental the task is to weave these textiles. According to the Getty, a skillful artisan weaved just one to six square meters of tapestry a year for a complex design. Several weavers worked side-by-side on these huge pieces of Woven Gold, which will be available for viewing in Los Angeles until May 1, 2016.

Photo of The Chateaux of Monceaux by Dyanne Weiss