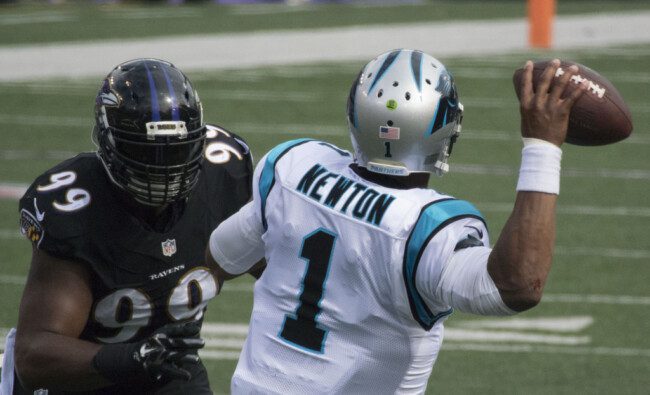 The Carolina Panthers are only the ninth team in NFL history to start the season with a perfect 13-0 record, and the New York Giants hope to spoil that when they host the Panthers this Sunday. Carolina is hoping to become only the fifth team in NFL history to remain perfect throughout the regular season, joining the ranks of the 1934 and 1942 Chicago Bears, as well as the 1972 Miami Dolphins and the 2007 New England Patriots during the Super Bowl era. Only one of those teams, the 1972 Miami Dolphins, managed to complete the perfect season by winning the championship at season’s end, although the Patriots came very close in 2007.

Of course, to complete the regular season with a perfect record, the Panthers would first need to win on the road at MetLife Stadium against the Giants on Sunday. If they manage to do that, Carolina would become only the fourth team in NFL history to start the season with a perfect 14-0 record. Only the 1972 Miami Dolphins, 2007 New England Patriots, and 2009 Indianapolis Colts maintained a perfect record that late into a season.

While the Panthers have perfection in mind and have mostly clinched everything they could have clinched to this point, the Giants are fighting for their playoff lives. Carolina has already won the NFC South division outright, and have earned a playoff bye. The Giants, by contrast, are struggling through an up-and-down season and are 6-7 at this point. They need to win to keep pace with Philadelphia and Washington to remain tied atop the NFC East, and want to avoid another disappointing loss like the one they suffered in Washington a couple of weeks ago.

On Monday Night Football, the Giants hung on – barely – to defeat the Dolphins in Miami. Quarterback Eli Manning had one of the finest games of his career, completing 27 of 31 passes for 377 yards and four touchdowns. His quarterback rating was an impressive 151.5, and the 87.1 percent completion percentage was the second best in Giants history, behind the record-setting performance by Phil Simms in Super Bowl XXI. The effort earned him NFC Offensive Player of the Week status for the second time this season.

That game against Miami was not clinched for them until star wide receiver Odell Beckham, Jr. caught a pass for a first down very late in the fourth quarter that effectively ended the game, preserving the victory for New York. The Giants have struggled all season with closing out games they probably should have won, giving up leads late in the final quarter to lose games against Dallas, Atlanta, New Orleans, New England, and the New York Jets. If they are to become the first team to beat Carolina this weekend, they need to show much more consistency, particularly on defense.

Given their struggles, finding a way to defeat the 13-0 Panthers is a tall order for the Giants. Still, Carolina is only favored by four points heading into this game, which is highly unusual for a team which has remained undefeated for such a long time. However, one of the things that has fueled Carolina this season has been a perceived lack of respect. Many oddsmakers do not seem overly impressed by the Panthers, and seem to feel they are not as good as their record indicates. Carolina has won a lot of close games – sometimes barely scraping by. Few of their victories have been blowout wins, although they are coming off a very impressive 38-0 victory against their division rivals, the Atlanta Falcons. By contrast, the oddsmakers seem to feel that the Giants have lost a lot of close contests and might be better than their record would suggest.

While the Giants are just trying to keep their playoff hopes alive, Carolina is flirting with the rare perfect season. Some experts are divided over whether or not pursuing a perfect regular season is a good idea. Former Giants quarterback Phil Simms feels that the perfect record would be a distraction, and could take a physical toll on the Panthers, who suffered several injuries during last week’s victory over the Falcons. Simms argued that staying healthy for the playoffs, when the games count for much more, should be the first order of business for Carolina. However, former Bengals quarterback Boomer Esiason and former Cowboys wide receiver Michael Irvin feel otherwise. They believe that the Panthers should indeed pursue this very rare chance at history, because perfection would be something truly unique and special.

Heading into this big game, the Giants do have a bit of history on their side, which should provide them with hope for success in spoiling Carolina’s bid for a perfect season. The Giants have earned a reputation for beating teams with undefeated records that were in pursuit of the historic perfect season. In 1934, they ended the pursuit of perfection by the Chicago Bears in the NFL Championship Game, despite having lost twice to Chicago during the regular season that year. In 1998, the Giants knocked off the 13-0 Denver Broncos, although the Broncos still wound up winning the Super Bowl that season. Most recently and most famously, of course, the Giants met the undefeated New England Patriots in Super Bowl XLII. The Patriots beat the Giants in the final week of the regular season to complete the perfect regular season, and many at the time argued that New England was the most dominant team in the history of the sport. However, New York would exact a strong measure of revenge in the Super Bowl with a last minute touchdown drive to hand the Patriots their first and only loss that season, thus denying New England the perfect season in the final minute of the final game of the season, on the biggest of all possible stages. Carolina might do well to remember those failures if they choose to pursue perfection through the regular season.

2 Responses to "Giants Hope to Spoil Perfect Season for Panthers"