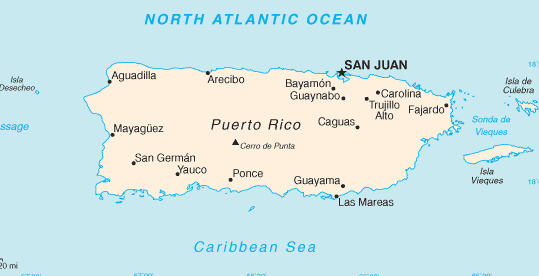 The debt burden for bankrupt U.S. Commonwealth Puerto Rico is a whopping $72 billion. Governor Alejandro García Padilla and others told the Senate Judiciary Committee that Puerto Rico had run completely out of cash. But, the island’s efforts to restructure some of the debt, according to a 2014 Recovery Act, may conflict with U.S. bankruptcy law. In a move that they hope resolves the issue, the U.S. Supreme Court agreed yesterday to hear arguments from the commonwealth about reinstating a Puerto Rican law that supports its debt-ridden public utilities restructure $22 billion of their debt as part of the island’s efforts to dig out of its financial crisis.

The high court will decide whether the disputed law does conflict with federal bankruptcy regulations. The issue specifically deals with a section of the federal bankruptcy law, which would affect the $8.2 billion in debt filings by its utility, the Puerto Rico Electric Power Authority, known as PREPA. The court also agreed to hear a companion case filed on behalf of the island’s publicly owned Government Development Bank.

The U.S. territory has been teetering on the brink of financial disaster for some time. The island avoided a major default in November and has been taking steps to halt payments on other large debts due the end of this month.

Under federal bankruptcy regulations, states may authorize their counties, cities, utilities and other government branches to restructure their financial obligations under Chapter 9. But that law excludes branches of Puerto Rico’s government. to resolve the issue, Puerto Rico enacted the Recovery Act, which critics maintain violates the federal code. A federal court in Puerto Rico claimed the law violated bankruptcy codes in February, which was affirmed by a U.S. appeals court this July.

García-Padilla issued the following statement explaining aspects of the lawsuit before the Supreme Court: “The Recovery Act was enacted to provide the Commonwealth’s public corporations with similar restructuring abilities that other U.S. entities have at their disposal.” He added that they look forward to having the opportunity to defend the constitutionality of this legislation. He urged action to alleviate the debt burden as relieve the humanitarian crisis that is growing on the island, which has 3.5 million residents.

In agreeing to review the case, the Supreme Court noted that only eight justices will hear the case. Justice Samuel Alito will not participate. (It is believed that he is recused because of investments in a fund that holds Puerto Rico municipal bonds.) The commonwealth will still need the support of five justices, however, since a 4-4 split decision will leave the lower court ruling intact and the Puerto Rican law invalid.

If the U.S. Supreme Court rules for the Caribbean island, it would support its hopes and efforts to dig out of debt by placing PREPA as well as other government agencies, like the Puerto Rico Highways & Transportation Authority, into bankruptcy. The court hearing will take place in the spring and a ruling is due by the end of this court session in June 2016.