Chicago Blackhawks Will Win Another Championship 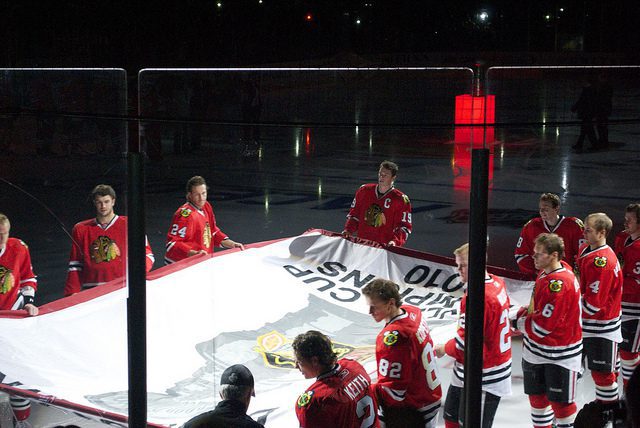 The Chicago Blackhawks are having yet another record-breaking season, which may lead them to win another Stanley Cup championship. After a 5-2 win against the Montreal Canadiens on January 17, Chicago is now at the top of their division with an 11-game winning streak. They will play the Nashville Predators (20-17-8) on January 19.

On January 17, Chicago matched their franchise record with their 11th straight win this season as they won 5-2. The Blackhawks together took a total of 33 shots, and while the Canadiens came close with a total of 29 shots, Montreal was still no match against Chicago’s progressively-growing team. In the 29 shots that were attempted, Montreal’s Lars Eller and Max Pacioretty were the only two players that scored. Chicago’s Corey Crawford, whose hometown is actually Montreal, had a total of 27 saves against his hometown team. Jonathan Toews scored two goals that night. Marian Hossa and Richard Panik both scored a goal, with Hossa’s goal being due to Montreal having an open net. Patrick Kane, the team’s captain also added a goal and an assist that night as well.

The Chicago Blackhawks will most likely win another championship this season with Captain Patrick Kane having what may not only be his best season yet but will also be the best individual record in the Blackhawks’ franchise history. Every season seems to be an improvement from the year before with Kane only being 27 years old and in his 9th year with the NHL. He currently is leading the NHL with a total of eight goals and 40 assists, with the past 11 games having a total of 11 assists. This year, Kane also has a total of 69 points, with 29 of those points being from goals he scored and 40 being from assists. Last year, the team’s overall high was set by Toews. Toews scored 66 total points compared to Kane’s current 69 points. The only difference is that there is still 34 games left this season. Kane may come close to doubling his 69 points and may set another history-setting record, with him projecting to score a total of 118 combined points from both goals and assists this season.

The Nashville Predators currently have a record of 20-17-8 and are ranked 6th in the Central Division, with Chicago being at the top spot. The Predators won their previous game on January 16th against the Minnesota Wild with a final score of 3-0. Nashville’s goalie, Carter Hutton, made a total of 29 saves and left the Wild scoreless. This also resulted in ending a streak of their own, which was five losses in a row. Hutton will have to guard the goal against Kane and the Blackhawks, who will be playing to win their 12th game in a row.

The Predators’ scorers that game included Eric Nystrom, Roman Josi, and Filip Forsberg. Crawford, the Blackhawks’ goalie, will have to watch for their momentum and drive to start their winning streak though Crawford is having a successful individual season as well. Crawford currently has a .947 save percentage within the past 18 games. For the season, though, he has a .929 save percentage, making this his career-high thus far. In what could be the fourth Stanley Cup title this decade, the Chicago Blackhawks are growing to have every member of its championship-winning streak team be a significant contribution to what may be the league’s best franchise team they have had so far.

One Response to "Chicago Blackhawks Will Win Another Championship"