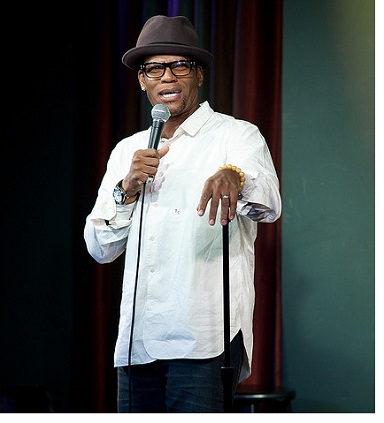 Having never been one to bite his tongue, comedian and radio show host D.L. Hughley does not hesitate to speak on the dual nature of powerhouse Bill Cosby. There has been much controversy surrounding Cosby over the alleged sexual escapades which have sparked many social media wars among fans and former supporters. While some may be at odds over the validity of the accusations, Hughley explained his fellow comedian’s dual nature as, “a humanitarian, humanist and a rapist.”

Many have criticized the women with claims that the accusations are fake because if not, the women would have spoken up long ago. Truth is, there were accusations long ago that were shut down by this powerful icon. Hughley admitted having heard rumors regarding Cosby’s criminal allegations years ago. During an interview on Sway in the Morning, the actor shared an experience which sheds light on the powerhouse that is behind the Cosby brand.

The king of comedy said while working for Kiss FM, Cosby called in for an interview and was being completely rude and slammed Hughley and the Def Jam Comedy series because of the nature of comedy displayed on the show and the language used by Hughley and fellow comedians. After about 10 minutes into Cosby’s rant, the comedian interrupted asking the Different World creator what it is he wanted the audience to know. As the powerhouse known as Cosby continued to berate Hughley, the comedian responded and said:

With all due respect Mr. Cosby when I say the N word no girl ends up with her underwear on backwards and drugged.

The interview ended abruptly and within minutes, big wigs from the radio station came and confiscated the tape and confirmed that Cosby is powerhouse by saying:

This will not air and if it does none of you will ever work in radio again.

Needless to say, the interview did not air and at that point, the former Comic View host knew that Cosby was a true powerhouse. When people question why the women took so long to come against the comic legend, it makes absolute sense to someone like Hughley who has experienced the wrath of the Fat Albert writer first hand. Even still, the Hughleys actor commended Cosby for being one of the greatest comedians this world has known. This, however, does not change the fact, according to Hughley, that the powerhouse known as Cosby is a humanitarian, humanist and a rapist.

After hearing the recent allegations shared by the D.L. Hughley Show host, the internet went crazy. One of Cosby’s supporters, Douggie J. Doucet, snapped back and said:

The same dude you are ripping on, is one of the same dudes that open the doors for you. Your day is coming to, the same people who praise you will be the first to stab you in the back. In due time, your sunshine will get cloudy. We have to stop joining in white people parties and protect our own.

If he did this to your sister or mother would you stand behind him…..Just saying???

Having never been one to shy away from controversial topics, the king of comedy said he is firmly convinced that Cliff Huxtable is innocent, but the powerhouse Bill Cosby drugged every one of those women. The probability of a dual nature is

nothing new, the Soul Plane” actor explained. It is possible to be talented and yet have a mean streak. Cosby is a great comedian and humanitarian, but he is also a rapist, shared the actor; adding, “If Lucifer could be talented and evil in Heaven, surely it could happen in Harlem.”

The powerhouse Bill Cosby was victorious in his efforts to kill the 2009 interview with fellow comedian D. L. Hughley. If he could do that, and have possibly ended Hughley’s career as an on-air personality, why would anyone believe he would not have been powerful enough to end the careers of his alleged victims had they come against his legendary brand? The Cosby Show creator has done wonderful things for humanity and the world of entertainment, but according to the on-air radio personality of one of the kings of comedy, this powerhouse possesses a dual nature which has allowed him to be a humanitarian and a rapist.