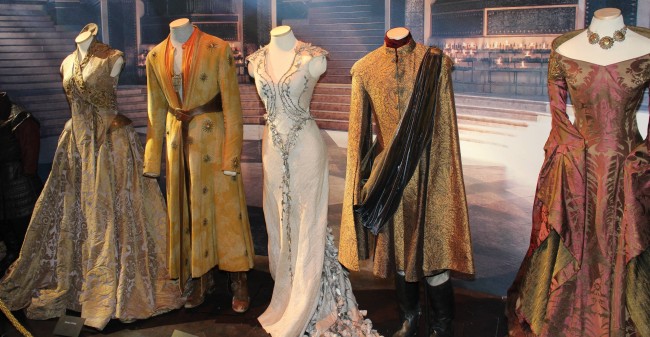 As fans eagerly await Game of Thrones Season 6, many speculate on what is in store for their favorite characters. As the Stark family vowed countless times during the past five seasons, “Winter is coming.” The shocking HBO original series will continue sometime in April 2016.

Based on George R.R. Martin’s A Song of Ice and Fire series, Game of Thrones has developed an eager following. The story depicts the brutal and vulgar battle between seven realms and the fight to claim the all-encompassing Iron Throne. The story’s theme is the epitome of usurpation, deception, and strategic conquering.

Although Game of Thrones’ has a reputation for violence and shocking scenes, one particular episode, in which Sansa Stark is violently raped by her new husband, Ramsay, caused a backlash by fans of the show. Although the scene was tastefully done, it was difficult to see, and was no more violent than when Daenerys Targaryen was taken by her Dothraki husband, Khal Drogo. What made these episodes worthwhile was the amount of strength those women drew from their experience. They will be the ones to watch out for in the coming season.

There is some speculation as to whether or not the Game of Thrones producers, David Benioff and D. B. Weiss, are going to taper down the violence. Fans across the country claim that dulling the savagery would dishonor the show and take away the core of its existence. The books on which the series are based are not nearly as gruesome as some of the scenes are in the adapted show. Fans of the series, however, are accustomed to the shock value it offers and would be disappointed with its sudden absence. The scandalous scenes and the uncustomary fate of favorite characters are what makes this series unique, and it is what keeps people coming back for more.

In the Game of Thrones Season 5 finale, a few of the favored characters met unexpected fates. Jon Snow was supposedly killed. He has been a solid hero throughout prior seasons, so it is hard to swallow such an uneventful death for him. Rumors say that he will not be in Season 6, but there are others that counter that hearsay. To this point, Jon Snow has walked the proverbial hero’s journey, as described by Joseph Cambell’s paradigm. In Cambell’s words, “Only birth can conquer death—the birth, not of the old thing again, but of something new.” If Jon rises reborn, he could very well be the adversary the dreaded White Walkers are not prepared to handle. Then again, Martin has demonstrated his lack of appreciation for the typical hero’s journey. Ned Stark would attest to that. Winter is coming.

Cersei’s walk of shame scene cost HBO more than $200,000 after a Croatian church opposed its filming. The devious, spirited vixen was ordered to have her hair cut short. Then, she was forced to strip and walk naked through the streets of King’s Landing for her confessed crime of fornication. The real shocker occurred, however, when the Mountain returned and picked her up. His armor hid his face, and only made people curious about the horrid experiments Oyburn performed on him.

When Arya Stark finally got her chance to kill Meryn Trant, she did so without mercy or restraint. Her training with Jagen H’ghar must have been a disappointment to the master of a faceless man. He drank a poison that caused Arya to go blind, but it will not taper the female’s spirit. Arya is much too strong for that.

Daenerys is left in the Dothraki sea when her dragon becomes too weary to carry her any further. In search of a safer place to stay the night, Daenerys wanders off and soon finds herself surrounded by a khalasar, a nomadic Dothraki horde that will either remember her role as Khaleesi or see her as a threat to their valued traditions.

Myrcella is poisoned to death after Sand Snake Ellaria gives her a deadly kiss goodbye. This act of vengeance prevents an alliance between Dorne and the Lannisters. Cersei is going to love the news that her baby girl was poisoned to death. Her response is bound to be spectacular.

After Stannis learns that half his army has left, he receives even more bad news – his wife was found hanging by her neck in a tree. Shortly afterward, his meddling sorceress, Melisandre, ditches him and rides back to the Wall, just in time for Jon Snow’s execution. Even though Stannis feels his defeat, he continues to march toward King’s Landing to challenge Ramsay. The result is a slaughter in Ramsay’s favor. Wounded Stannis is found by Brienne, a female warrior who supposedly executes him for treason. His death is never confirmed, however, because the scene strategically cuts away to show Ramsay killing the rest of Stannis’ men.

Before Ramsay returns to the castle, Theon and Sansa escape by jumping off the castle wall into the snow, over 30 feet down. Unless that snow is soft and deep, they are not likely to survive without injury.

Game of Thrones Season 6 faces many unanswered questions the fans will want to have answered. The tangled threads of deception will unravel in this next season. There are bound to be a few surprises as well. The Iron Throne grows cold in the knowledge that winter is, indeed, coming.

Sources:
Inquisir: Game of Thrones to Tone Down Sexual Violence in Season 6
Bustle: 5 Questions That Will Hopefully Get Answered In Season 6 of ‘Game Of Thrones’
Movie News Guide: ‘Game of Thrones’ Season 6 Brings Down Sex Scenes for the Sake of Fans?