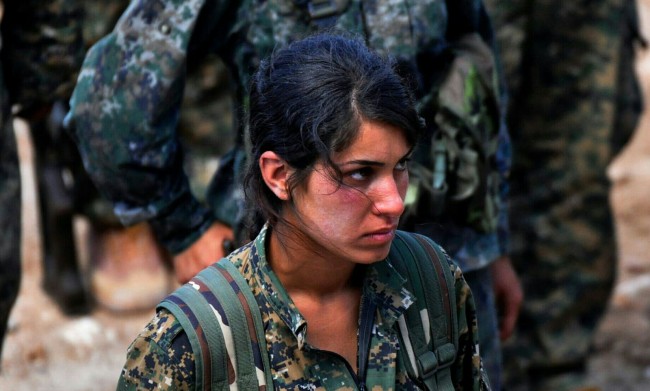 The self-proclaimed caliphate which calls itself the Islamic State of Iraq and Syria (ISIS) revealed its vulnerability when it refused to fight a small militia group of women. According to Reuters, ISIS fears female warriors, believing that if a Kurdish woman kills a man, he will not ascend to heaven.

The People’s Protection, also known as the People’s Defense Units, is comprised of 20 percent women. The Kurdish name for these units is Yekîneyên Parastina Gel‎ (YPG), pronounced “yakinian parastina gayal.” The YPG is primarily Kurdish, but also recruits Arabs, Turks, and Westerners. It is the main armed service of the Kurdish Supreme Committee, the government of Syrian Kurdistan (Rojava).

Independent reports that many more Christian women are joining an all-female militia group in Syria to fight ISIS. The Female Protection Forces of the Land Between Two Rivers is a small battalion of approximately 50 women who graduated from a Syrian training camp in Al-Qahtaniyeh. The group consists of women from all backgrounds who want to fight for something other than territory. They want to prove that females do not exist to care only for the home. The majority of these brave warriors are in their early twenties.

One recruit, 36, was a hairdresser in Babylonia. Her husband encouraged her to take up arms for the YPG to prove that women are far more valuable and can do more than manage a home. She admits that she misses her two children, but is fighting to protect their future.

In a recruitment manifesto released earlier this year, an ISIS propaganda wing encouraged women to lead a life of home-based responsibilities per their divinely-appointed right. The missive also criticized Western females and the idea of gender equality as a human right. The terrorist group has not directly responded about its vulnerability to Kurdish women.

According to The Kurdish Project, Muslim girls are often married off starting at the age of nine. Those who are considered religious minorities are raped and enslaved. One witness reports seeing a man turn to strike his wife for walking too close behind him. Christians have been ordered to convert or pay a religious levy. If they refuse, they are killed. Thousands have been forced from their homes.

Thabirta Samir, 24, told Agence France-Presse (AFP) that she used to work for the Syriac Cultural Association. Now, she takes pride in serving the military. She said she is not afraid of the members of ISIS and vows to be in the midst of the battles against these terrorists. She further stated,  “ISIS is afraid of girls.” Their vulnerability reveals itself when they shy away from the Kurdish women warriors.

The Women’s Protection Units is a faction of the YPG that formed three years ago. It has since earned the reputation as a vital force against ISIS after reclaiming Kobani. Other YPG victories include liberating the Neshwe neighborhood in July 2015.

Commander Telhelden, 21, told CNN that female soldiers provide an advantage against ISIS. She said, “They think they’re fighting in the name of Islam. They believe if someone from Daesh [Isis] is killed by a girl, a Kurdish girl, they won’t go to heaven. They’re afraid of girls.”

National World News says this all-female faction of the YPG has earned the admiration and respect of men and women throughout the world. It has played a vital role in reclaiming some of the villages and compounds that border the Kurdish frontline. Inspired by Turkey’s Kurdistan Workers’ Party (PKK), the fighting women have fractured the region’s conservative social norms by fighting on equal terms beside the men, who show them immense respect.

Though the females have had great success in the field, they understand the dangers and are prepared to face the worst, despite ISIS’s vulnerability toward Kurdish women. The Washington Post reveals that the soldiers would rather die than suffer the brutal rape and enslavement that befell thousands of Yazidi girls in August 2015. If caught, YPG women are ready to take their own lives in the fight for a better future.