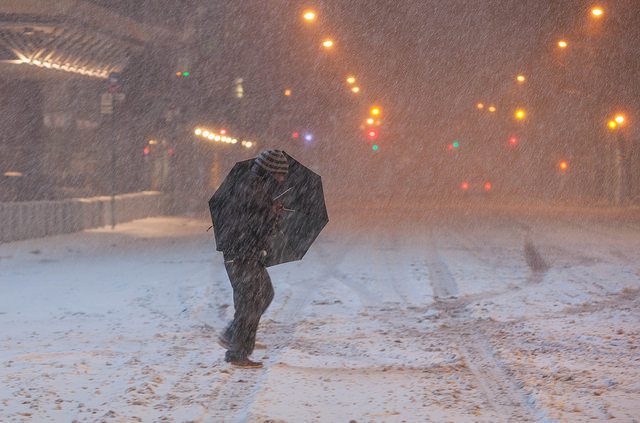 On Jan. 21, 2016, the National Weather Service issued the year’s first winter storm warning, which could lead to significant effects for the East Coast of the United States. The storm, which could also affect the Southeast and Midwest, is predicted to start early Friday, January 22, and last for an approximate 36 hours. Many airlines have already cancelled thousands of flights going to and from the coast, and also within the United States.

This storm will affect millions living on the East Coast. Snow started to fall rapidly in Washington D.C., which is predicted to be in the storm’s bullseye, and will spread in a northeastern direction. The cities that will be affected by this winter storm warning will be cities between the nation’s capital and New York City, which is nearly a quarter of the nation and nearly 15 different states.

Washington D.C. could see up to 2.5 feet of snow by the conclusion of the storm on Saturday night. The heavy snow will also consist of winds and gusts. According to the National Weather Service, it is predicted that sustained winds could be as high as 30 miles per hour with gusts of at least 10 miles per hour. Even stronger gusts of up to 65 miles per hour could hit Maryland beginning at 1 a.m. EST and lasting for at least 12 hours.

Conditions will be the worst on Friday afternoon and through the night, with the storm declining through Saturday. Thunder snow could also occur at the conclusion of the storm. In total, the East Coast could see anywhere from 16-30 inches of snow, with Washington D.C. predicted to have the highest recorded amount.

The National Weather Service has issued what could be the biggest winter storm warning of the year. A total of 6,000 flights and counting have already been cancelled. The majority of the cancelled flights are centered in New York City, Washington, D.C., and Philadelphia. Many major airlines have already issued waivers for their cancelled flights. According to CBS News, flights should be back on their regular schedule by Sunday.

With roads, schools, and flights already being affected by the winter storm warnings throughout the entire East Coast, sporting events will also be affected this weekend. North Carolina, which is predicted to see snow and ice, is among those that will be affected. The Carolina Panthers, who have only lost one game this year and are a league favorite to be in this year’s Super Bowl, will host the Arizona Cardinals in Charlotte on Sunday. This game will be for the NFC championship and will determine who will attend the Super Bowl. It was reported that many Cardinals fans made adjustments to their flights after the National Weather Service issued the winter storm warning and flew to Charlotte early in order to avoid the climax of the storm. Other games that were postponed includes NBA games in Washington and Philadelphia, as well as an NHL game in Washington, D.C.