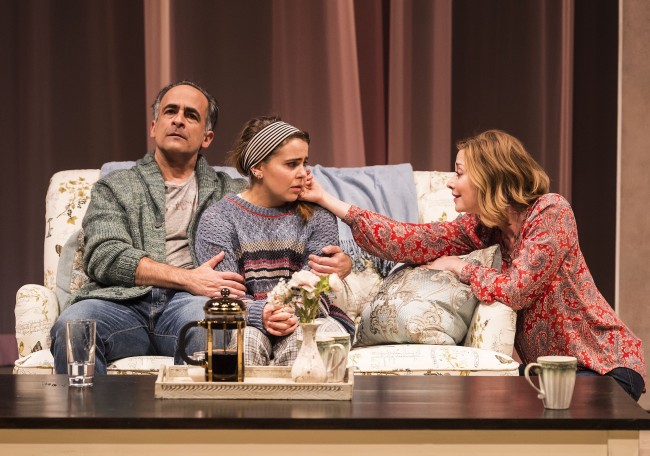 The Mystery of Love & Sex a dramedy by Bathsheba Doran that opened Feb. 21 at the Mark Taper Forum in Los Angeles gamely explores family relationships, stereotypes and shifting social norms. Making its West Coast debut, following an off-Broadway debut last year, the play is an ambitious exploration of lives in today’s complex world. The play is frustratingly slow initially, but ultimately enjoyable (and very funny) with a strong, believable cast.

The script offers a quarter of identity crises as it tackles racial stereotypes, religion, and homosexuality, seasoned with substance abuse, a suicide attempt, and dashed expectations. There are a lot of jokes about “who had it worse – Jews or blacks,” with references to slave ships, pogroms, Nazis, etc. Some of the conflict and discussions end a little too quickly, leaving some issues explored a little too lightly, but it keeps the play moving.

The Mystery of Love & Sex starts with twentysomethings (Mae Whiteman as somewhat self-absorbed Charlotte and York Walker as Jonny, a black boy who has been her best friend growing up) try to exude confidence as young adults hosting a dinner party for the fortysomethings (Charlotte’s parents, former Southern belle Lucinda and New York Jew/detective novelist Howard, portrayed by Sharon Lawrence and David Pittu). The parents are finding that the questions about life gnawing at the younger generation are buried resentments and secrets for them. No one is happy dealing with the mysteries of their love and sex lives, but the underlying caring for each other shines through. 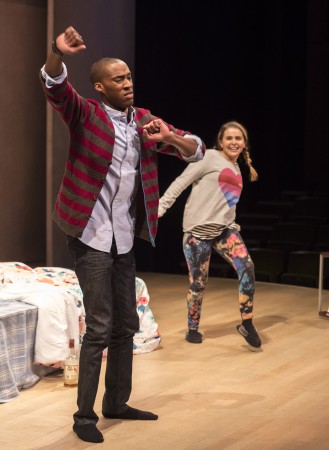 The two young adults (college age in the early scenes) are trying to figure out who they are emotionally and sexually. The girl’s parents are trying to figure out their relationship while being supportive of their daughter. Charlotte suggests to her parents that she and Jonny are “very much beyond dating,” but that was an attempt to reassure her parents that things are fine. Meanwhile, Charlotte and Jonny are both wondering about their sexual preferences.

Once the parents leave, they discuss the facts that Jonny is a strict Baptist and remains a virgin, while Charlotte confesses she has a crush on a girl. Drinking heavily, she attempts to seduce Jonny by stripping and asking, “Doesn’t it feel inevitable to you?” Jonny answers, “It feels like an inevitable way to ruin the friendship.” Charlotte’s mortification is tough to watch, because Whitman is so credible and earnest.

The second act of The Mystery of Love & Sex picks up with another shared meal five years later with tensions about race, religion and sexuality bubbling to the surface. Each character has recognized some truths about themselves and moved on/further apart. Jonny clashes with Howard and with Charlotte, and the long-term relationship is torn apart with previously unstated opinions and rage.

Director Robert Egan’s sparse staging effectively gives the cast room and keeps all eyes on them. Pittu and Lawrence shine and make the most of every scene they are in. Whitman has grown up before the audience’s eyes as a child in One Fine Day and Hope Floats to more recent work on Parenthood and in The Perks of Being a Wallflower. She comes off as very eager-to-please, which reflects the role. Walker does the most transition in the play, going from an insecure outsider to a confident author/professor. Their performances in Doran’s work exploring The Mystery of Love & Sex will be in L.A. through March 20.

One Response to "Exploring Mystery of Love & Sex in L.A. [Review]"