South Africa Exploding Into a Gulf of Uncertainty 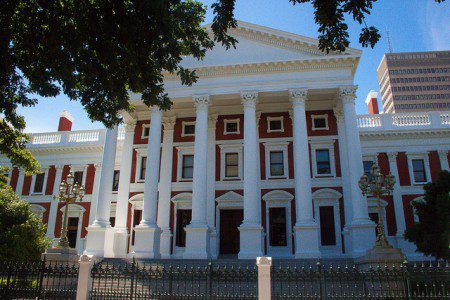 Through the arrogance of President Jacob Zuma, South Africa is exploding into a gulf of uncertainty. It is not only the pretentiousness of Zuma but the members of the African National Congress (ANC) party, whom willingly and blindly cover up mistakes, corruption, and mismanagement. South Africa has a president that tramples on the constitution and the ANC refuses to take action. President Zuma will not resign, the ANC will not recall Zuma, and until some legal expert finds a way around the impasse, it is ANC business as usual. The voters have no recollection of the importance of a constitutional democracy and will blindly continue to vote for the corrupt ruling party.

Last week, two political parties went to the Constitutional Court of South Africa in a bid to prove that Zuma undermines the Public Protector. If the Constitutional Court determines that there has been a violation of the constitution and the ANC refuses to impeach the president, South Africa would have a constitutional crisis. It is a classic case of abuse of majority power. It is a real concern that the ANC executive refuses to recall Zuma and it could mean that there is a personal interest to keep Zuma in power, implying that the ANC is corrupt.

Responding to members of parliament on March 11, 2015, Zuma said, “I never took a penny,” and the president repeatedly said that the Public Protector’s findings were recommendations only and not a verdict. A week before the Constitutional Court proceedings, Zuma told the nation that, “I will pay back the money.” It is deceptive and the typical style of the ANC party and president to wrangle itself out of blunders in an attempt to appease the voters and remain in power.

Zuma is a corrupt leader, filling government structures with conformists, in a bid to stay in power. Given the fact this type of leadership is the culture throughout most provinces of South Africa, it renders democracy worthless. For Zuma, this strategy is effective.

Zuma, as head of state, did not respect or promote compliance with the Public Protector. Ignorance of the law is no excuse for the president of South Africa, especially since the Nkandla issue has dragged on for more than two years. The only absolute and positive outcome of the Constitutional Court debate is the reaffirmation of the Public Protector’s recommendations that remain binding. How will Zuma overcome another investigation, should one arise against him, now that the findings of the Public Protector are in the open? The only way would be to change the Constitution of South Africa.

The entire ANC caucus is divided, and this week, several members have turned against Zuma. Members who still promote integrity, coupled with the knowledge of expecting a leader should, at all times, maintain the dignity of character and advocate conduct that is beneficial for the country. Zuma missed the responsibility of delivering an upright, honorable, and wise government. It is a known fact that leaders of varying capacities, as well as levels of competence, come and go. The decision needs to be made whether to lead toward progress or stagnation, prosperity or hardship. Is Zuma a tyrant, a leader who does not honor justice, and contemporary leader that plunders state resources for self-enrichment?

Most leaders are evaluated by the degree to which they are perceived to have brought economic prosperity to the citizens of their country. Zuma has failed miserably to bring prosperity to South Africa and the economic conditions have declined, which have caused damaging circumstances to emerge.

Zuma should step down, especially since the nation’s constitution has been violated. The abuse of power cannot continue under the current leadership of the ANC, a party that has absolutely no respect for the constitution or law. Whether or not he is fit to hold office is the next broad question, as political parties continue to slam the intolerance and insolence of Zuma.