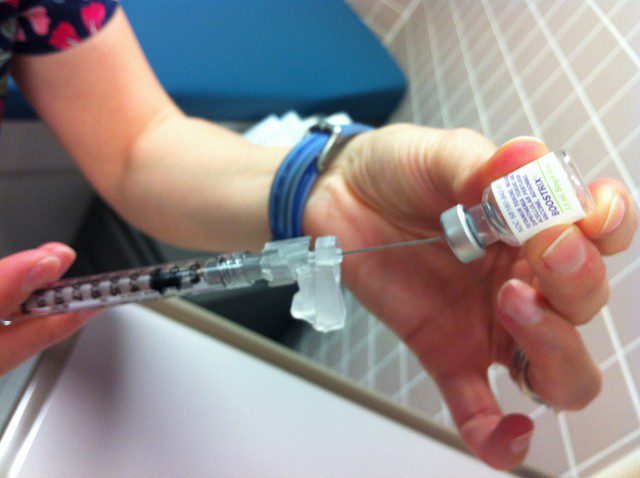 Parents who believe the vaccines their children received are effective have another think coming, according to new research. One factor in the resurgence of pertussis or whooping cough, besides those who do not get vaccines passing around the infection, is the weakness of the vaccine at providing protection a few years out.

The DTaP vaccination and Tdap booster shots children are given are meant to protect against whooping cough, tetanus and diphtheria (the two abbreviations are for different formulas that address the same illnesses). While no vaccine is 100 percent effective, the Tdap booster apparently has more issues than most vaccines.

A new study shows that the booster shot pre-teens receive prior to starting seventh grade only works for a short time. Research on adolescents insured by one large California health insurer, Kaiser Permanente, showed the recent resurgence of whooping cough could be partly attributed to problems with the booster shots.

The pertussis booster shot given at age 11 or 12 only provided “moderate” (about 69 percent) protection for one year. The immunity continues to wane with protection at 57 percent the second year, then 25 percent and 9 percent in the next couple of years.

As a health maintenance organization (HMO), Kaiser puts emphasis on well-child visits and vaccines. They indicated that 96 percent of the children in their Northern California health care network, which was used for the study, received the Tdap shot before their 14th birthday. However, more than 1,200 children and teens were diagnosed with whooping cough between 2006 and 2015, with most in the epidemics of 2010 and 2014. Looking at the dates the children received the shots and when they got ill helped them derive the statistics about vaccine effectiveness after various timeframes.

The findings, which will be published in the March issue of Pediatrics, underscore the limits of today’s whooping cough vaccines. One theory why the protection has become ineffective is that U.S. health officials switched from providing the traditional whooping cough vaccine in the 1990s to the DTaP, which also protects against diphtheria and tetanus. DTaP works well in the short term, but requires booster shots (typically given around age 5 and age 11 or 12), which may not be enough.

Older children and teens are a growing proportion of the increasing number of whooping cough cases, according to the U.S. Centers for Disease Control and Prevention (CDC). In 2012, there were 48,000 cases reported nationwide, which was the highest annual amount of pertussis cases since 1955.

Pertussis, or whooping cough, is a highly contagious respiratory illness only found in humans. Initially, whooping cough produces cold-like symptoms, but it is not a virus. It is caused by bacteria that attach to the tiny hair-like cilia that line parts of the upper respiratory system. The bacteria damage the cilia by releasing toxins. The airways swell and the person begins to have violent coughing spasms, which often make breathing difficult. After a coughing fit, someone with pertussis commonly makes a “whooping” sound when trying to take a deep breath, hence the name.

People who are infected with pertussis are most contagious in the time period of two weeks after the coughing begins. Antibiotics can help shorten the period, but the disease spreads via the cough.

It is not likely public health officials will recommend returning to the old whooping cough vaccine over the Tdap or DTaP, even with the protection weakness the Kaiser study showed. However, the study should open discussions on when best to vaccinate, how often and whether a strengthened vaccine makes sense.