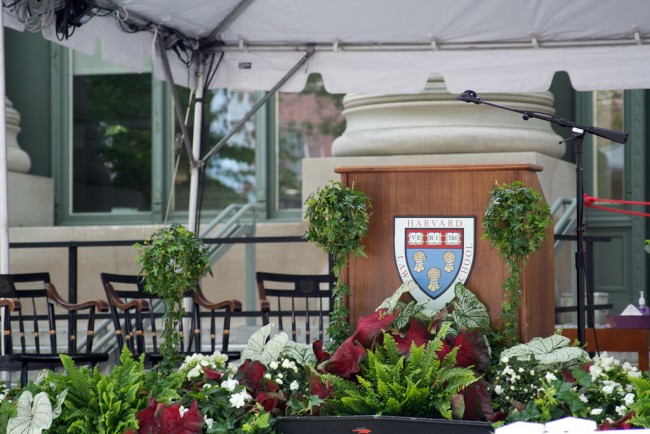 The Harvard Law School seal, which includes a family crest of three sheaves of wheat against a blue background, is facing extinction as the school’s official symbol due to its connections to the slave trade.  The crest is that of the Royalls, a slave-owning family of the 1700s. Land bequeathed to the school by Isaac Royall, Jr. in 1781 was used by Harvard to establish its first law professorship. The debate regarding the symbol has two sides: those who believe the seal should honor the enslaved who suffered under the Royall family, and those who believe the official status of the seal should be revoked, almost as if the school were pretending that slavery on the Royalls’ properties never happened.

A committee formed to review the seal’s status recommended to the Harvard Corporation on Friday that the emblem no longer be used as the official symbol of Harvard Law School. In their report, which was not unanimous, the committee, which included faculty members, staff, alumni and students, laid out their findings on the emblem’s history as well as arguments both for and against the usage of the symbol as the Law School’s official seal. All twelve members of the committee were united in their recommendation that the Harvard Law School openly acknowledge the emblem’s ties to slavery, although it would seem that particular ship has now thankfully sailed.

The committee’s investigation included community meetings, deliberations, study of the seal itself and review of more than 1,000 opinions gathered from affiliates of the school. After months of fact-finding and a final deliberation, an 11-page report recommending the removal of the seal and a four-page dissent were sent to the governing body of the Law School. The dean of Harvard Law School, Martha L. Minow, is in agreement with the committee’s plea to change the emblem. The report ends with an appeal to be “released” from the symbol. The language used feels problematic. A committee wanting to honor and respect brutalized and dehumanized slaves would do better than pleading to be free from imprisonment by an official seal.

The two dissenting members made a good argument that keeping the sign as the official Harvard Law School seal would serve as a constant and straightforward reminder and honoring of the slaves who were kept by the Royall family. Annette Gordon-Reed, legal history professor, advocates keeping the shield as a reminder of the institution’s disquieting past and using it as an “opportunity to educate” as part of a “responsibility to the enslaved.” The dissenting opinion suggests redesigning the emblem to make the wheat smaller so that the Latin word “iustitia (justice)” could be included, “making explicit our debt to the enslaved and our commitment, in their memory, to the cause of justice,” which seems to be a fair compromise, as it both retains the major elements of the original seal and pays homage to the enslaved who paid for the Royall’s bequest with their backs, their tears and their lives.

The majority opinion, however, is that any value the emblem holds as an historic reminder to darker days is outweighed by the negative feelings it engenders. In the report, the committee makes the argument that any official symbol of Harvard Law School should “closely represent [its] values, which the current shield does not.”

Under the committee’s investigation, the seal’s historical appeal comes under question as well. Designed in 1936, the Harvard Corporation made the shield the official emblem of the Law School shortly thereafter. The committee could find no evidence that the Corporation knew of the connection between the crest on the seal and of slavery. In fact, only after research published in 2000 unearthed the meaning behind the Royall crest, did the emblem become viewed as a symbol of slavery.

After an incident of racially-rooted vandalism at Harvard last year, in which faces in photographs of African-American professors were covered with black tape, the push to remove the seal, which began in October of last year by a student group called “Royall Must Fall,” was energized. The emblem became a symbol of unequal treatment of minorities currently attending the school as well as the movement toward greater diversity at Harvard Law School, which is nearing the celebration of its bicentennial in 2017. A bicentennial celebration would be a great time to unveil a new seal, redesigned to honor slaves, rather than one pretending that slavery never existed.

The upcoming occasion makes a review of the seal’s history especially important, according to the committee and Minow. Opponents of efforts to remove the seal as the official emblem of Harvard Law School say that no matter what is done in the present, there is no erasing the past – or its impact, making the current recommendation smack of an attempt to ignore the pain and brutality behind the financial success that allowed for the donation to the Law School by the Royalls.

Unlike other historical symbols of racism, such as the swastika or the Confederate flag, the Harvard Law School seal has not always stood for slavery, but has only represented the School and its graduates, writes Gordon-Reed. The majority opinion of the committee acknowledged the “disappointment” that removal of the shield will cause to those who associate the shield with their school and the fruits of their hard labor without ever considering that it might also represent slavery.

Included among the more than 1,000 people who contacted the committee to express their opinion were many older, African-American alumni who had a strong emotional attachment to the seal “as a proud, even defiant, symbol of their accomplishment at a time when the larger world often refused to recognize their merit,” according to the report. Many of these alumni felt as though the removal of the shield would be a removal of their accomplishments. Others, however, were deeply offended by the shield and did not want to be represented by the crest of a slave-owning family.

Although the committee made clear that their task was only to review the seal of Harvard Law School, the action of the Corporation will likely have a campus-wide impact. Some buildings at Harvard University were named in honor of men who once owned slaves, and it stands to reason that if one symbol is deemed as unfit to represent the institution, other reminders of the slave era will also be examined.

In that vein, a group of students who have been occupying a campus student center for the past few weeks and who are calling themselves “Reclaim Harvard Law School” says they are pleased with the committee’s recommendation, but also say that it is not enough. They are also calling for the establishment of new offices and committees to address the issues of inclusion and diversity, changes to the faculty and committee, and the creation of ways to make it easier for disadvantaged students to afford the school.

The Corporation will ultimately make a decision on whether the shield of the Harvard Law School is removed as its official emblem. In her supporting opinion, Minow wrote that whatever they “[decide] about the shield, the larger discussions about our values, our culture, and the importance of strengthening our community will continue, because they must continue.” Although an argument over Harvard Law School’s chosen seal seems slightly overwrought given the immense injustice and failings still felt by minorities in the United States, it is going to take these kinds of small steps, happening on a daily business, to outrun the repercussions of centuries of institutional racism. Keep the seal, but alter it to reflect a new understanding of for what it stands. Nothing could be more symbolic of the purpose of higher education than two opposing sides agreeing to meet in the middle of the road, and then moving on with the next step.