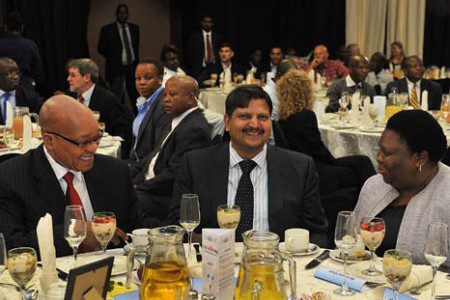 President Jacob Zuma is once again an embarrassment to South Africa by failing to carry out the constitutional obligations. An announcement received by Mcebisi Jonas and Vytjie Mentor illustrates the extent of the powerful Gupta family influence over the president. The statement issued has the potential to weaken Zuma’s credibility and power. There is the possibility that Zuma will be recalled if the last allegations are proved to be factual.

In a press statement, Jonas openly admitted that the Gupta family offered him the position of Minister of Finance, a few weeks before Minister Nene was removed. Jonas rejected the offer and believed that it makes a mockery of the democracy. President Jacob Zuma is the person responsible for appointing ministers. It is constitutionally unethical to allow the Gupta family to make a decision about whom to appoint. This is especially true in the Ministry of Finance where corruption and apparent state capture is particularly vulnerable.

The Gupta family has denied the allegation and challenged Jonas in court. In the past months, the Gupta’s ‘relationship with Zuma has been described as a family who is politically connected. The ruling African National Congress (ANC) government and Gupta family strongly deny any connections. However, as new allegations surface, this places the ruling ANC party and Zuma in a sensitive position. The president and ANC members have bluntly rejected the relationship with the Guptas and claim all is well within the ranks.

The revelations will have devastating implications for all South Africans who are truly riding through troubled times. All this is happening while the appeal court has found that the ANC government did, indeed, break international law by not arresting the Sudanese president a few months back. There is also the Nkandla issue of paying back the money and the infamous spy tapes saga that remains unresolved. Did South Africa’s problem start with former unskilled, unemployable exiles and cronies, who resorted to turning the ANC government party into an employer, employment agency, and a tender distributor?

President Zuma is failing the people of South Africa and its constitution. Once the allegations of the Gupta family involvement is confirmed, it could proceed with preparations to recall Zuma. However, the protection the president has is vast, and the only way a recall vote would be fair is to hold it in secret. At this time, the level of the Gupta family influence would need to be determined and how this influence affects the people of South Africa.

Zuma must answer to the allegations and now is the time for all senior members of the government to come forward and tell the truth. The people of South African will ultimately have to decide if the constitutional law will be the governing force or if society is to be directed by the interests of private people.

The question is why Jonas would lie about something that could damage the country and what is to be gained from allegations of this magnitude? On the other hand, the Guptas have reasons and incentives to lie. Mentor has said that more will be revealed at the end of this week. Is someone setting the stage for a takeover?