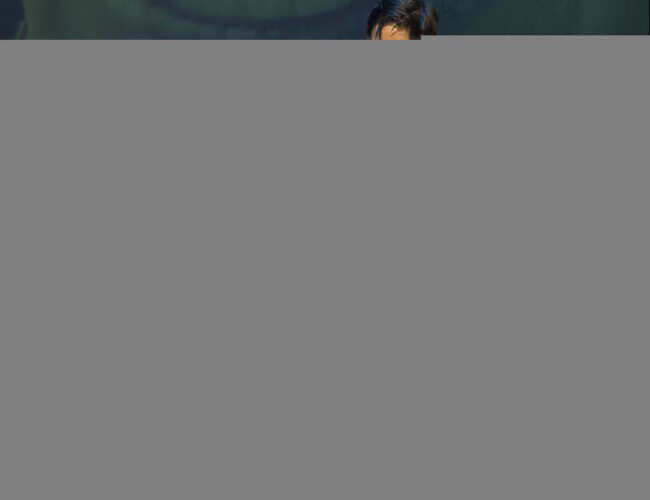 Like most creative looks at sexism and body shaming, Women Laughing Alone With Salad is alternately over-the-top and uneven. But, the play that opened its West Coast premiere run on Sunday, March 13, at the Kirk Douglas Theatre in the Los Angeles area, has some funny and thought-provoking moments in between the more cringe-worthy parts.

The sometimes delicious, sometimes wilted tossed mix that an evening with Women Laughing Alone With Salad offers is no surprise. Sheila Callaghan, who is a writer for Showtime’s Shameless, developed the show. At times, it makes Shameless seem tame!

The play has a recurring riff on women eating salad to stay thin and body shaming those who do not. It also playfully spoofs ridiculous images of women dining on lettuce, drinking water and doing other “healthy” behaviors are used in advertising to set cultural expectations. In one scene, women order individual vegetables for lunch and play with them more than eating them. In another a character comments on who women are “socialized to appreciate looks over comfort,” as many high-heel wearers can acknowledge. 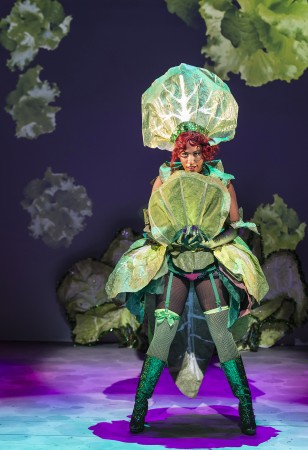 Salad is in many ways the play’s bad guy, repeatedly used to shame and mock women. The play starts with three women taking their salad lunch breaks on a park bench. Advertising man Guy, the antihero (played by David Clayton Rogers), joins them with his massive burrito, thereby setting up the evening’s look at gender identity and dietary inequity.

The audience then meets the three women in Guy’s life. There is his girlfriend Tori (Nora Kirkpatrick), who survives on salad and is “so skinny people worry about her;” his beauty-treatment obsessed mom (Lisa Banes), who wants him to marry a girl with a “pronounced clavicle;” and the more well-rounded Meredith (Dinora Z. Walcott), who admits to being a size 10.

Guy’s misogyny is readily apparent when he hits on Meredith and brings her home for sex, in spite of his girlfriend being there. His solution is to push his self-esteem deprived girlfriend into a three-way. The simulated sex is a mix of disturbing and funny. Callaghan seems to know she pushed the first act as far as she can, and changes things up in the second half.

One character notes, “I’m as frustrated as you are that women hate themselves.” Callaghan shows that she blames women as well as men for perpetuating the expectations that make the world so hard for women. She does that by creatively having the characters switch sexes in the second act. So the resulting parodies of male behavior from the female actresses is entertaining, particularly when they examine how women are portrayed in the media while discussing a proposed ad campaign.

The characters and bits all have potential. However, the over-the-top approach makes them less relatable than they could be so it comes off as a mixed green mélange that needs less dressing. Callaghan’s uneven, but ultimately funny look at body shaming and sexism, Women Laughing Alone With Salad, will be at the Kirk Douglas Theatre in Culver City through April 3.