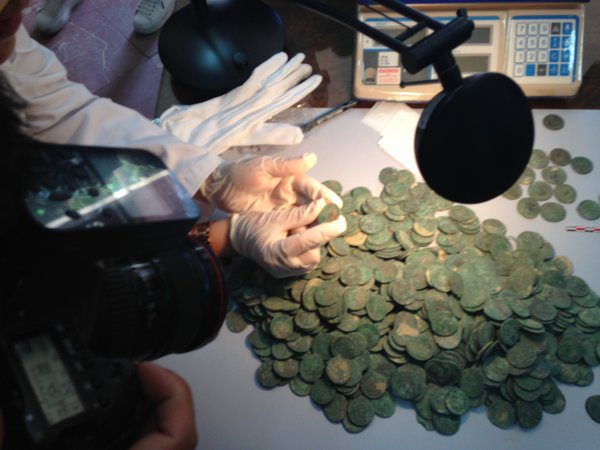 Many people dream of discovering buried treasure; a group of construction workers in Spain did find buried Roman treasure. The workers were digging a ditch to add a water supply line in a park when they noticed something irregular about the terrain. It turns out the spot in the Seville province town of Tomares was a chamber containing 19 amphorae (a type of jars) filled with more than 1,300 pounds of 4th century bronze coins.

Workers for the city and water department opening water trenches in Zaudín Park discovered the Roman archeological finding on Wednesday. (The Romans ruled parts of what is now Spain from about 200 BC until the 5th century.) The treasure trove of Roman artifacts is unique for the Andalusian region and the way they were conserved. The 19 vessels were concealed a few feet underground where they were covered by some bricks and ceramic filler.

Once the workers discovered the containers, all work was halted. Following a protocol in place when ancient artifacts are found, archeologists working for the Andalusian government and the Civil Guard were contacted. The archeologists asked for the construction trench to be expanded to give better access to the finding.

Some of the containers, which are not the type Romans had typically used for wine or transporting grain, were broken, probably by the construction crew before realizing why the ground felt different there. However, many of them were still intact, just sitting there filled with money for approximately 1,700 years.

The coins were then transferred from Tomares (population 24,000) to the Museo Arqueológico de Sevilla (Archeological Museum of Sevi

lle). Archeological researchers believe that a cache of so many homogeneous coins in one place has not been found before.

The bronze coins bear images of an emperor on one side and from Roman fables on the back. The currencies studied initially are believed to feature emperors Constantine and Maximian. They appear to not be worn out by usage and were probably not in circulation. The coins were probably minted in the East, transported to the region for some purpose, and placed in an underground chamber for safekeeping.

Ana Navarro, the director of the Archaeology Museum, noted, “What is incredible is a discovery of this size — there are 19 amphorae, all complete.” She also illustrated the incredible coinage quantity and weight of the finding. “I can assure you that they can’t be moved by one person alone, because they weigh so much due to the coins inside,” said Navarro.

The museum’s director theorized that the coins may have been stored to pay imperial taxes soldiers, or civil servants. She acknowledged, “It is a unique collection and there are very few similar cases.” Navarro noted that she “could not give you an economic value, because the value they really have is historical and you can’t calculate that.”

Now that they finding of buried Roman treasure in Spain has been completely unearthed, the construction workers are going back to work on the park. that is, unless they find anything else.