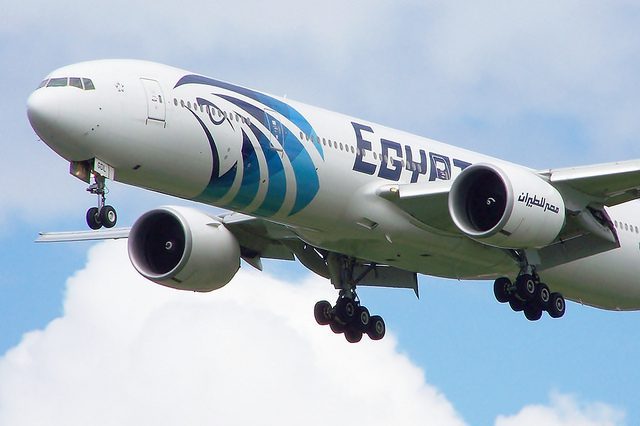 EgyptAir Flight MS181 was hijacked on Tuesday, March 29, 2016, by a man who reports described as unstable. Flight MS181 was scheduled to take off from Alexandria, Egypt, and fly to Cairo. A man with an explosive vest took control of the plane–only it was not explosive at all.

Early in the morning of March 29, passengers boarded their flight expecting to be in Cairo within 45 minutes. At 6:36 a.m. Eastern European Time (EET), the plane took off from Burj El Arab airport in Alexandria and began its journey.

Shortly after takeoff, a lone hijacker took control of the plane and it veered off course. Reports from CNN claimed that 70 people were aboard, including 55 passengers. Instead of heading south toward Cairo, the plane traveled north over the Mediterranean Sea.

The hijacker ordered to be flown to Istanbul, Turkey and was advised the plane did not have enough fuel. He then demanded the plane be refueled in flight. A representative of the Cypriot Ministry of Foreign Affairs told CNN this demand was denied.

One of the passengers, later interviewed by ABC News, Farrah El Dibany, recalled a member of the crew asking for passengers’ passports. El Dibany was caught off guard as the flight was domestic. She was further alarmed when she noticed they were flying over the ocean instead of land.

The plane was rerouted to Cyprus because it could not make the trip to Istanbul. It landed safely at Larnaca Airport at 8:07 a.m EET. All passengers, crew members and the hijacker were safe.

When police investigated, they found the hijacker did not have an explosive vest. ABC News reported the vest was actually several mobile phone cases he made to look like an explosive device. Homer Mavrommatis, director of the Cyprus Ministry of Foreign Affairs Crisis Management Center, told CNN the hijacker of EgyptAir Flight MS181 was described as an unstable man.

The hijacker was identified as 58-year-old Seif-al-Din Mustafa. While investigating Mustafa, officials found he had an extensive criminal record. According to Egypt’s Interior Ministry, Mustafa had been charged with forgery, impersonation, burglary and drug dealing prior to this hijacking.

During hostage negotiations, a government spokesman of Cyprus told NBC News that Mustafa spent three hours trying to make a deal, which included him communicating with his ex-wife.

Mavrommatis told CNN officials the motive of Mustafa’s hijacking was unclear, “He kept on changing his mind and asking for different things.”

El Dibany gave insight into the man who hijacked Flight MS181, she told ABC News that Mustafa was erratic and changed his mind frequently. At one point, he was willing to let all women and children go and the next moment, only Egyptian nationals could be freed.

After what NBC described, as a seven-hour hostage ordeal, one of the last men released wanted a souvenir. A British passenger, Ben Innes, took a picture with Mustafa and his fake suicide belt. In the picture, Innes looked rather pleased with himself. Mustafa, on the other hand, had a sullen, disappointed look about him.

The hijacker of EgyptAir Flight MS181 was described as an unstable man by the name of Mustafa. His motives were elusive to officials, however, they are inclined to believe it was something related to his ex-wife. All of the people aboard the plane were released safely.