Presidential candidate Ted Cruz and radio host Charlie Sykes are going anti-Trump. Cruz, on Monday, April 4, 2016, predicted a win over Donald Trump in Wis. Trump acknowledged it would be possible to lose in La Crosse, Wis. A well-liked talk radio announcer in Milwaukee, Sykes, who leads the “Stop Trump” movement, has spent the past few months hammering away at “The Donald” for what he calls his bullying antics. On Wednesday, April 6, Trump headed up a rally in Bethpage, N.Y., which is in Nassau County, Long Island.

In both the Democratic and Republican parties, the presidential candidate leaders lost on Tuesday, April 5, in the Wis. primary. Cruz finally overcame Trump, giving the billionaire his first loss. It was only about a little over a week prior that the GOP nominees became even more hostile with one another and bombarded each other with insults. It was no longer about political views; it turned personal when they threw accusations of marital infidelities at each other. Cruz borrowed a line from the 1995 movie The American President when defending his wife against Trump, saying, “If Donald wants to get in a character fight, he is better off sticking with me, because Heidi is way out of his league.” The entire GOP establishment has been determined since Trump’s Utah win to stop him from winning the presidential nomination.

Sykes, like presidential candidate Cruz, runs an anti-Trump campaign. Only days before the primary, the billionaire phoned into Sykes’ radio talk show. When the host could not get Trump to apologize for his repeated tweets of an unbecoming picture of Cruz’s wife, he called him a bully who is not fit to hold the office of president of the U.S., saying; “I expect that of a 12-year-old bully on the playground, not somebody who wants the office held by Abraham Lincoln.” The intense debate took just about 17 minutes, ending with Sykes asking the real estate mogul if he had any idea that he had called a “#nevertrump guy,” and Trump replying he had no clue. 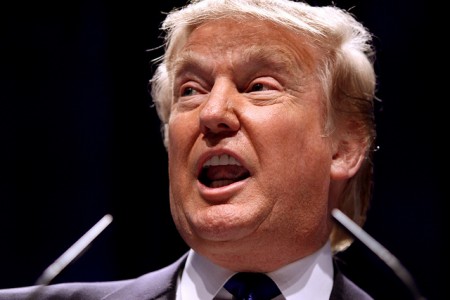 Trump’s campaign was in Bethpage, Long Island on Wednesday, and the 45-minute rally ended with two people arrested and several of his elderly supporters being carried out on stretchers. The real estate mogul jumped from topic to topic in a speech lasting just under an hour. He ended with a melodramatic reading of The Snake, an Al Wilson hit song from 1968. Thomas Krumpter, the Nassau County police commissioner, reported only one incident between supporters and protesters, which was quickly broken up. His supporters say he is going to get America’s respect back, and that he will get Americans what they need when he closes the border. Outside, protesters held up signs, and one such protester, a retired engineer from Valley Stream, N.Y., had a sign with a picture of Hitler next to Trump with the caption “Stop Fascism.”

Cruz and Sykes are going full force with their anti-Trump message. At times, it seems to backfire on the Texas senator, as with his negative comments about N.Y. However, Sykes’ comments about the tycoon seem to be much more effective with his listeners. Although Trump still leads his fellow Republicans with more delegates, he still does not have the overwhelming lead the GOP wants him to have before they give him the nomination.