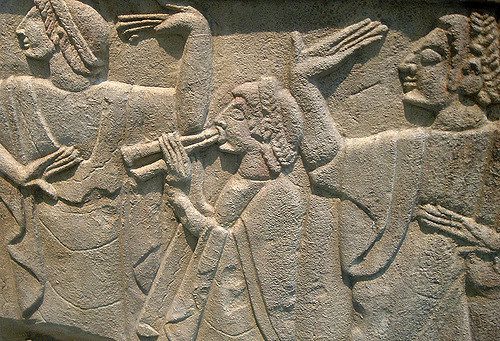 An ancient buried Etruscan religious text was found in Italy based on a recent 2016 publication by researchers. After having been hidden for almost 2500 years it was uncovered in 2015 by a team of archeologists from the Mugello Valley Archaeological Project. The discovery was made at an ongoing Etruscan temple excavation. Southern Methodist University released information that the item unearthed, as a foundation stone, was most likely a sacred text.

Engraved in sandstone, the writing dates back to the 6th Century B.C.E., although, numerous items of this ancient civilization have been discovered through the years. Some of these items have been funeral or burial artifacts, often carved in high relief.

“[This find] will be remarkable for telling us about the early belief system of a lost culture that is fundamental to western traditions,” according to project co-director Gregory Warden. He is a classical (490–300 B.C.E.) archeologist and Associate Dean of the Meadows School of the Arts at Southern Methodist University. Professor Michael L. Thomas, of The University of Texas Center for the Study of Ancient Italy, is the co-director of the project.

This ancient culture was considered to be very religious and worshiped many gods. The stele could provide insight into the worship by this culture of a god or goddess. A stele is an archeological word used to describe an upright stone with an inscription or relief design. This particular slab was almost four feet in height with a width of about two feet. The monolith was a massive 500 pounds. It was inscribed with 70 letters and had punctuation.

According to Prof. Warden, some of the grammar involved in the Etruscan language has previously been translated; these include things, such as the object or verb, in a sentence. What makes this find so exciting is the expectation that the stele will offer insight into the nature of the deity that was worshiped at this site.

Writing on a stone also appears to be an Etruscan rarity. Most inscriptions of more than a few words were placed onto ephemeral media. The substrate for the dedications tended to be tablets made of wax or books composed of linen cloth, according to Jean MacIntosh Turfa, of the Museum of Archaeology and Anthropology in Philadelphia. She went on to say, “This stone stele is evidence of a permanent religious cult with monumental dedications.” It appears to date from the early 5th Century to late 4th Century B.C.E. The monolith was reused as part of a temple’s foundation, which was built later than the age of the writing on the stele. “[This] points to deep changes in the town and its social structure.” This newly found Etruscan ancient buried religious text could be a type of Rosetta Stone.

The Mugello Valley Archaeological Project has uncovered artifacts indicating the beliefs and discoveries involving the daily activities of both upper and lower classes of people. These items included kilns, pottery, and home life articles. This particular excavation was of Poggia Colla, an Etruscan settlement near the modern-day location of Vicchio. Located close to the city of Florence, Vicchio is a town in the Italian region of Tuscany.

This old civilization were fore-runners of the ancient Romans; contemporaries of the time. Ancient Romans called them Tusci or Etrusci. Combining the words creates Etruscan, a word that was first used in the English language in the 1700s. The Etruscans began their civilization between the Arno and Tiber rivers, they eventually expanded to an area between the Po River valley and Campania. As for their writing, it was usually left to right, but often boustrophedon, where words are from right to left and from left to right in alternate lines. Their own culture developed from a civilization known as Villanovan. This latter group existed before recorded history, from the 9th to 5th Century B.C.E.

Thriving until the end of the second century B.C.E. the Etruscan people became fully subsumed into Roman culture after numerous wars with the Romans. This ancient Etruscan religious text could unearth more information about the civilization and its culture.