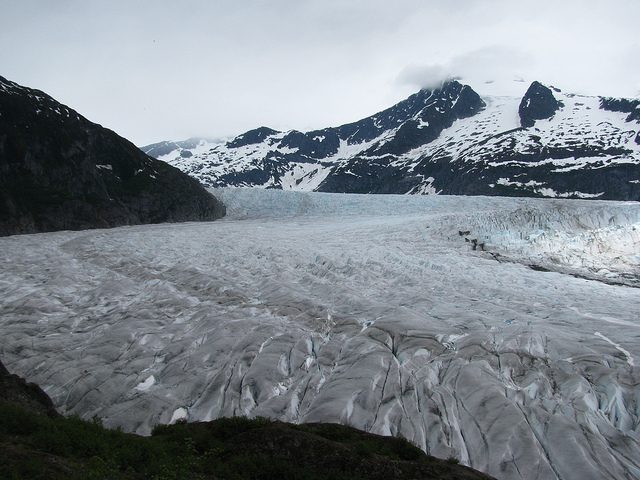 The Juneau Icefield could sooner or later be gone, and is, in essence, almost disappearing completely. A recent scientific publication has concluded that under differing scenaria, the icefield will be reduced in size. One model predicts total elimination by the year 2200.

Researchers associated with the University of Alaska – Fairbanks (UAF), Cornell University, and North Carolina Agricultural and Technical State University published their findings in the Journal of Glaciology. They used past climate data to envision future icefield possibilities.

As the fifth largest icefield in the Western Hemisphere, the Juneau Icefield is one of the largest in North America. It covers an estimated 1,500 square miles as it spans southeast Alaska and much of British Columbia. The 5,815-acre Mendenhall Glacier Recreation Area is located within the Tongass National Park. The icefield feeds Mendenhall Glacier, which is located about 12 miles from downtown Juneau, the capital of Alaska.

This recent scientific investigation looks at climate and, essentially, the warming of temperatures to reach its conclusions. This is according to Regine Hock, a glaciologist, or scientist specializing in glaciers, at UAF’s Geophysical Institute. The Juneau Icefield also is the source for about 140 other glaciers.

The research involved in this project was made more difficult by the lack of historical climate data, although the U.S. Environmental Protection Agency notes that the Earth is indeed warming. Its average temperature has risen by 1.5°F over the past century. Projections call for a rise of another 0.5 to 8.6 degrees Fahrenheit over the next hundred years.

The UAF analysis suggests that, based upon a continuing constant climate, as was experienced from the years 1971 through 2010, the icefield will shrink. It will, however, stabilize after having lost about 14 percent of its present-day volume. The field will get smaller but refreeze.

The possibility of the entire Juneau Icefield melting is close to certain by the year 2200. It will be gone. The climate conditions used by the scientists to project this disappearance scenario are the 2070–2099 climate estimates, which would hold steady beyond the year 2099. The Juneau Icefield could sooner or later be gone forever.

Sperry Glacier in Glacier National Park, Montana, has gotten smaller. It has shrunk from more than 800 acres and is now less than 250 acres. Glaciers in the Garhwal Himalaya in India have been reported as retreating so fast that by 2035, scientists believe that most Central and Eastern Himalayan glaciers could be gone.

Glaciers get larger when they accumulate more snowfall in the winter than they lose through melting and evaporation during the summer. Glacial mass is in balance when melting amounts equal that of accumulated snowfall; more melting means retreating, or smaller, glaciers.

When the ice from the glaciers melts, it turns to water. This change in the state of the ice causes more water to flow into the oceans and seas. As a result, water levels rise. The water temperature also increases.

“Between 1980 and 2011, glaciers around the world lost the water equivalent of 15.7 meters. That would be like slicing a roughly 17-meter-thick slab off the top of the average glacier and repeating that exercise worldwide,” states Michon Scott, author of a 2013 U.S. government article on glaciers.

Although arguments for and against the causes of global warming exist, global warming itself does exist. The planet is getting warmer. Glaciers are measured and are getting smaller. As they get smaller, sea levels rise. The Juneau Icefield is slowly disappering.