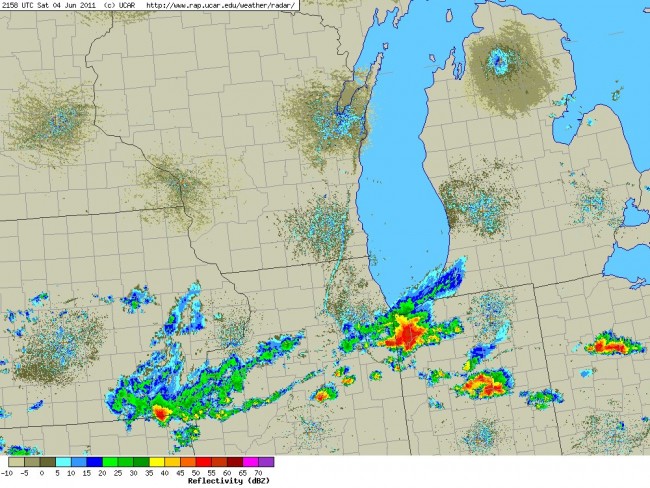 On May 11, 2016, the National Weather Service is changing things up after decades of putting the fear of Mother Nature into TVs across the country with their all-caps, all-business weather alerts. After nearly a century and a half, the weather service has decided to start using mixed cases.

The change will mean no more alarming alerts that make families hide in bunkers or dive under desks like the sirens did during the Red Scare. The normal warning messages from the Weather Service, which scroll across the bottom of the TV screen look like this: THE NATIONAL WEATHER SERVICE HAS ISSUED A SEVERE THUNDERSTORM WATCH EFFECTIVE UNTIL 9 PM CDT THIS EVENING FOR THE FOLLOWING AREAS:.

The severe weather warnings that run below TV programs will be the first to switch to mixed cases. The remaining products of the National Weather Service vow to stop their apocalyptic yelling with words by the end of the year.

The weather alerts for the National Weather Service were originally made for teletype machines, which only operated with capital letters. Teletype machines were electromechanical typewriters that could be used to send and receive messages, or “typewriters hooked up to telephone lines,” in the words of Susan Buchanon, of the National Oceanic and Atmospheric Administration, who also mentioned that the National Weather Service has been using an all caps method since 1849.

What seemed to be a group holding on to the nostalgia of the good old days, the National Weather Service took decades to weed out their outdated machines. Now, with machines that allow lowercase lettering, the Weather Service claims that updating their forecasting software will be the last block that needs to be put in place to stop using all caps.

The snail speed of change to the 21st century for the National Weather Service was not due to lack of effort. They have proposed lowercase lettering multiple times since the 1990s when the overnight spread of computers, the Internet, and emails made teletype machines virtually obsolete.

The weather agency was aware that capitalization had become synonymous with shouting when it came to the Internet. The usage of capitalization has even worked its way into contemporary literature, often replacing or adding emphasis to the explanation point.

The software, now in place for the forecasters to use to predict weather conditions, called the Advanced Weather Interactive Processing System (AWIPS), allows the change to mixed-case letters. There is a required 30-day notification period to give adequate time to prepare for change.

Meteorologist Art Thomas, of the National Weather Service, claimed that initially seeing the weather reports in mixed-cased lettering was a bit odd, at first. Later, as the testing went on, Thomas expressed the casual feel that the new style gave to him and his team, admitting that they were taken aback later on when the tests temporarily went back to the original all-caps form.

The weather warnings will remain very similar to those in the past and, in certain cases, the Weather Service will continue to use all-caps lettering for emphasis of the severity of the alert. Forecasts of international implications, regarding aviation and shipping, will continue to use capital letters, as well.

The IBW is also adding extra information, such as sources, hazards, and impacts, according to Merrell.  “It lets media know what the main threats of a storm are,” he said. “It will not be in every warning. But it is other information that can be added to particularly dangerous situations.”